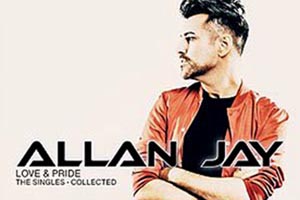 SCOTTISH recording artist Allan Jay is set to release a compilation album of all his hit singles recorded with UK label Energise Records.

The popular Scottish vocalist has featured constantly in the Dance music charts since his first release back in 2013 – going on to become one of the most successful new artists on the club scene and winning Best Male Artist at the Reloaded Music Awards and the LGBT Music Award for his duet with 90s Legend Rozalla.

2019 saw Allan sign to German Record Label DMN Records and have his biggest success to date with the release of Work Ya Love written by international producer Jason Havenhand and Dance Music Diva Soraya Vivian.

The single reached no 2 on both the North American Dance Chart and the LGBT+ world wide Music Chart as well as no 27 on the UK Itunes Dance Albums Chart.

The team at Energise Records are now bringing all Allan’s singles onto one album.

Love & Pride – the singles collected is set for release on August 29, 2019 and will feature remixes by Matt Pop, Stormby, Andy Haldene and Ross Alexander. It will include other artist such as Nicki French, Katie Boyle, Pete Wilson and Rozalla.

Allan released with the UK label from 2013 – 2018 and the album will include songs including I go to pieces, Its my Life, Drama Queen and off course the title of the album Love & Pride.

The album will be available on on digital platforms and CDs will also be available from the Energise Website.

Allan Jay is managed by Lynn PA Management and is Brand ambassador for Kiss Tanning Ltd and Molly and Tommy Clothing.