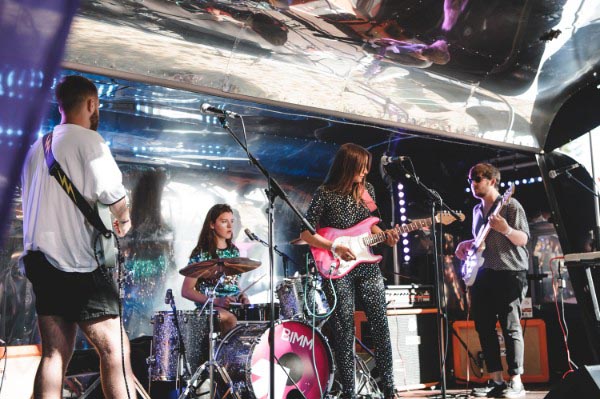 Following their performance at Brighton Pride, indie band Tygermylk share the heart-wrenching story behind debut single What God Would Keep Us Apart with Ray A-J.

BRIGHTON Pride was only a month or so ago, and we’re still not quite over it. From the legendary Britney Spears’ performance (even if she did momentarily forget where she was) to the always inspiring parade, and huge turn out, it proved to be a wonderful part of #Twenty-gayteen.

But one act on the Queer Eye Stage reminded us of the struggles we, as gay communities, are still facing, even today. Their name? Tygermylk.

A grand burst of orchestral synths introduces us to the Brighton based indie band’s debut single What God Would Keep Us Apart. A gorgeous flow of gentle guitar twills intertwine with warm sounds, as the track first heard on the Queer eye stage at Brighton Pride continues. Rich and welcoming strings begin to build their own wall of tension, as the crescendo of glowing notes hits our ears. And then, as the sound dissipates amongst whispering wind effects, a distant voice is heard.

“I knew when I first held your hand, the people who made you wouldn’t understand,” the sweet voice of lead singer Harland confesses, as she calls us in to listen, her peaceful voice masking the darkness behind her words. Despite her delicate timbre, and gentle fingerpicking guitar, that seems to hold an air of serenity, plodding along beside her, the lyrics Harland has penned detail a painfully heart-wrenching story that is all too familiar with the LGBT + communities – one of isolation, mistreatment, and fear.

“If only one seventeen year old who’s going through a similar thing hears this, it would have all been worth it.”

Unfortunately, at just the age of seventeen, Harland’s first girlfriend was torn away from her. Once they found out their daughter was gay, the singer’s sweetheart was completely denied by her parents and treated unjustly. Even going so far as to lock their own daughter away for two weeks, they met the discovery of their daughter’s sexuality with fear and rage. And, as Harland explains, the young girl was only released from her prison of sorts, once she had vowed to give up her relationship with Harland, and pretend to play straight. In other words, the poor girl had to deny herself of her own identity, in order to appease her parents. She had to become something else, in order for the people that she loved to love her back.

Reliving such a harrowing situation would have undoubtedly broken the best of us but, for singer Harland, the very fact that an injustice like this could still exist in a so-called modern year was too powerful to ignore.

“In the studio, I could barely get through singing it without crying, because I had the sense that this was something really important,” she recalls. With nearly 700,000 LGBT+ people reported to have been sent to conversion therapy in the US, as of 2018, we’re glad Tygermylk chose to expose this topic of mistreatment, in acceptance, and outright refusal to allow the existence of queer people. And, as every tear-jerking chorus  gushes from the band, and singer Harland challenges “What God Would Keep Us Apart?”, the message stands strong, and unwaveringly vows for change.

“It’s only because of the courageousness of others that I’ve been able to open up about this experience,”

“They tried to lock you in a cage,” Harland weeps, as the story bleeds through her almost literal words, and breaks our hearts wide open. An almost Kodaline inspired vocal melody ripples through our ears, coating each word with an overwhelming feel of vulnerability, as the silent revolution of a track continues. In its stripped back, thinly textured, approach the band’s first single from their soon to be released debut E.P. I Killed The Bees, hammers home the message of injustice, with the need for aggression. But the band always manage to swerve away from the serious tone of the track, just before things become too dark, adding a dash of hope and an empowering reminder to love our identities, with each repetition of the refrain “but I wasn’t ashamed.” After all, none of us should be.

“It’s only because of the courageousness of others that I’ve been able to open up about this experience,” Harland divulges about the brave decision to detail the story through the song that had poured out of her during a time of reflection aboard a train. “I didn’t realise how much this event had affected me until after writing about it; I couldn’t talk about it for months without breaking down into tears.” But we are truly grateful the singer is able to share her story with this beautiful track, as it reminds us there is still work to be done, in order for us to truly be accepted, and as the singer herself says: “If only one seventeen year old who’s going through a similar thing hears this, it would have all been worth it.”