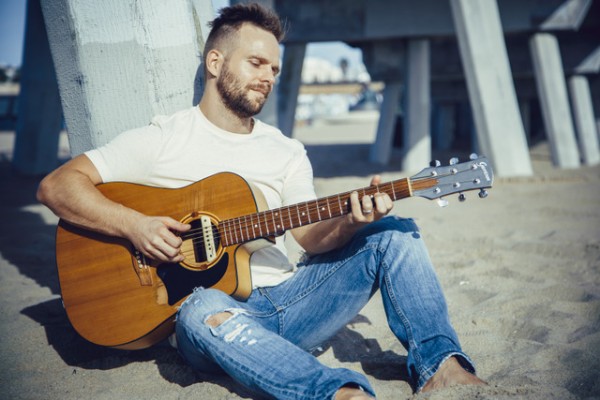 Well loved Bears singer Tom Goss flips beauty standards with his newest song, Round in all the right places.

FIVE YEARS AGO, a groundbreaking songwriter shone the spotlight on some unsung beauties. With a wonderful song all about his sweet, sweet love for a specific kind of guy, a Bear, the singer offered us a look at a different side of beauty. Needless to say, it was a hit with Gay men across the UK, and found its way into countless clubs. And with his new track, soulful singer-songwriter Tom Goss has taken down society’s narrow view on beauty once again.

Released today, the honest singer’s gentle ode to all things big and burly settles into our ears with a delicate twirl of jazzy vocals and stripped back guitar. Tom’s soft, darkly rich, voice waltzes through light trickles of laid back melodies, and airy drums that seem to oh so casually carry the relaxed rhythms with ease.

Accompanied by a powerful video (co-produced by Nathaniël Siri and Tom himself) depicting the brawny men in all their glory, Round in all the right places becomes more than just an easy listen; it’s an empowering anthem of body positivity and love.

“The world is telling plus sized people that their butts are sagging and their bellies are too flabby. ‘Change who you are, lose it at all costs,’ we’re told. Then we wonder why people often view themselves in a negative light. I want to send some messaging out into the world that says the opposite,” the singer who once trained to be a Catholic priest says.

This heartfelt piece is a wonderful addition to Tom’s growing catalogue of liberating tracks, (next to the equally powerful Bears, and 2012’s more serious Pills and Chalk), truly showcasing that everyone is beautiful. As Tom says: “Everyone should see the beauty in themselves and love every inch of their bodies.”

Tom himself finds beauty in the form of bigger men, especially. But even after the success of 2013’s hit Bears – a candid track that completely outlines the artist’s enchantment with the community, audiences just weren’t getting Tom’s love for beefy blokes. “People would constantly ask me if I really had a thing for large men. I used to get annoyed by the question, but then I started to reflect on it and I came to the conclusion that I hadn’t done an adequate job of describing what is so intoxicating to me about men of size,” the artist explains.

In this song particularly, the chirpy singer wanted to express his insatiable lust for stockier fellas unequivocally.
“For this one, I wanted to write something that was more specific and mature. I didn’t want to hold back. I wanted to be direct, honest and graphic; to really convey the shape, the allure, the seduction of big men. Too often in media, large men are painted as villains or buffoons; the butt of a joke. The goal here was to uplift and empower men of size and embrace their beauty.” And with the inspiring images of strong, plus size, men exposed standing confident and free, alongside the charming song, Tom seems to have surpassed his hopes.

Thankfully, the singer’s progressively sweet dedication to big blokes, is not just wonderfully erudite, but a breezy and soft gem for the ears too. And with his mastery of the quaint stripped back use of calming voice and guitar, the singer tempts audiences to edge nearer to the loop button.

Overall, the track is beautifully tranquil, and somehow evokes feelings of peace alongside a burning sense of pride.