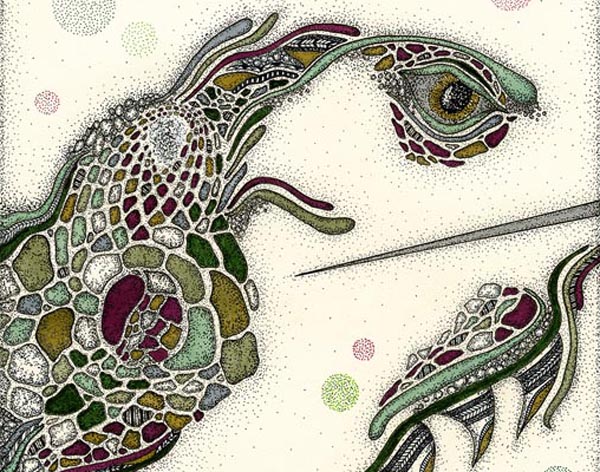 Warning: this e.p is not for the lively listener, or even alive!

Usually electronic songs are lively and interesting. There’s no dilapidated droning rhythms, or dull construction. The music is a driving force behind you, forcing you to dance in an ecstatic trance of joy. But that’s not always the case – at least not with this album.

To tell the truth, I have a tumultuous relationship with this genre at best. I’m a stickler for authentic instruments and acoustic timbres, and don’t really appreciate the fake sounds created by some DJs on a computer. So the outlook for this album was already bleak. Their are some exceptions to my unusual rule though, with MGMT and Passion pit, so I hadn’t entirely written Luka Sambe and Filter bear’s Lavine’s creature off, just was dubious. And rightfully so.

Imagine listening to the same petty drum on loop for about ten minutes, with the occasional addition of white noise and sporadic melody. It’s tiring. The…same…four…beats, over and over with nothing but an out of date synthesiser as company, humming it’s own four note melody.

Actually to call it a melody would be generous, it’s more of a desperate fumbling over the keyboard to create an atmospheric minimalist spread of notes. And if the lack of melodic direction was off putting, the attempt at metamorphosis is worse.

There’s no light or shade, not even a flicker, it’s just a barrage of synthetic noise that blares through the speakers. It’s all at the same volume, and stays in the same monotonous humdrum with nothing to add except the odd off beat thud from another layer of drums.

And it wasn’t just the first incarnation of the track that threw me off. Neither of the other remixes of Lavine’s creatures are very dynamic. They seem to both be stagnant and static, like a murky pond with no current. They’re repetitive and ignorantly drone on as loud as they can for as long as they can.

Occasionally the artist adds flares of sounds and different patterns, but they never stick long enough to matter. It’s as though someone has just thrown together loops from Logic or an audio workstation and went: “that’ll do, now where’s my money?”; it’s just lazy. I’m sure a lot of hard work went into this, and not to disparage the creators, but I just don’t want to indulge in a ten minute loop of the same thumping drum beat over and over.

It’s ironic because their names offer far more promise than this E.P.

It seems that all of the tracks sound the same, they just have “remix” at the end of their names in a feeble attempt to establish a difference.

Weirdly, as I listened to these tracks, I found something very familiar. It’s uncanny, but I couldn’t shake the feeling that these tracks sound very much like my own. Perhaps that’s why I find them so disengaging. They seem to have hit the same wall I did, in that it’s impossible to make a decent evolved piece with just electronics – that is, if your’e not as good as Passion pit, MGMT or anyone else. Making electronic music is hard, just as hard as any other genre, but some of the artists just seem so lazy in what they finally produce and call ‘music;. It’s lost it’s heart, and Luka Sambe or Filter Bear need to try harder to find it, if they’re music is to improve.

Unlike the tracks, I’m not going to drone on and on for too long. But I hope somebody out there can listen to this E.P and explain to me what I’m missing, because I so wanted to love these songs.

Update: After scouring the Internet for some time, I found the possible inspiration behind this E.P. and it finally makes sense. Listen to Say by The creatures, and there is a little redemption for Lavine’s Creatures‘ many sins.