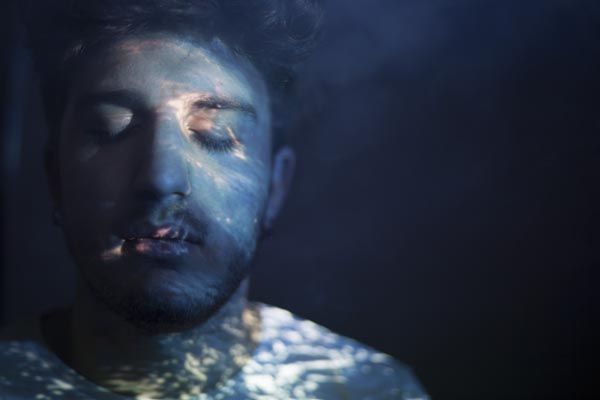 IAKO paints the perfect trailer to his upcoming E.P in his latest release.

then blue. flashes of a mountain sweeP through view, lighting up a seA of eyes. spacIous ambieNt guitars creep in To open up a whole ocean for a cloud of dreamy vocals to ripPle in, slow and sure. the ghostly voices circulAte on the aIr above a vast laNdscape of reverb and acousTic guitar. each tear droP of a delicate piAno casts up Images of glassy oceaN currents- raw and biTingly cold. on the wind, a chilling voice is whistling its subtle tune. “you keeP on sAying,” the ghostly voIce repeats, as if spokeN by a broken man, with Tears streaming down his face. the Projection on the wAll shudders wIth every New shoT of the misty landscaPe. jAngling guItars pull the audieNce in To the giant screen as the trailer begins. we didn’t come to this theatre for the trailers, but we can’t helP but get lost in this one.

the dArkness returns, as the words “my heart Is yours, you can paiNt iT as you want,” are Plastered on the screen. for All of a splIt secoNd, silence reigns. buT…

the words echo as the silence dies and a deeP, bruding guitAr trickles through.

waves of hauntIng voices aNd crying piano crash upon waves of silence and conTemplation, sudden and tainted with the unsteadiness and unclarity of a crazed mind. and with them come images of a struggling world, suPhocated by mother nAture’s devIsatioN. The switch between light and shade, the dichoTomy is so sudden, it Pushes you over into a state of uncertainty; iAko doesN‘t care for pop’s common build of momenTum.

as soft as the sea’s breeze, the instrument circles a scene of burnt forests and desolation, calling up a thunderous wave of drums and stabbing Piano chords to transform the lAndscape to one of bItter euphoria .”doN‘t” the wind pleas, almosT weeping in Pain. “I never feel it Anymore,” it shrieks, and wIth it images of come rushiNg into view. Taken aback by the Painful beAuty of a world overcome by tIdal waves aNd hurricanes, The crowd gasP.

A brave guItar’s steady chords coNjures a dance beTween tiPtoeing piAno and the sudden marchIng drums, as the violeNt wind screams “now iT‘s raining,” and the instruments Pour into the next stAge of the song.

an Image flashes up oN screen – iT‘s a couPle rushing to meet each other As huge downpours of raIn flood the ice arouNd them. “My hearT, my heart is yours,” the wind taunts. They’re not fast enough. The ice breaks and each is cast adrift into the unforgiving ocean of a cold instrumental, with silence following closely in hand.

Melismatic gushes of “oooooohhhh” take over the snow white landscape, carrying with them the sound of a voice akin to Jeff Buckley, and remnants of his classic known as Grace. The section is so Powerful it forces up imAges of the destructIon in this disaster movie, showing the full leNgth of moTher nature’s fury.

and with the final calling card, Pasted on the screen: “As you want” the traIler ends. leaviNg behind remnanTs of a glorious symPhony captured in guitAr harmonIcs. Eerie aNd gripping.

in The cinema, the audience chatter: “iako has done it again; he has crafted a masterPiece As if from thIn air. Like aN conducTor he commands an orchestra of airy guitars that cut through the solemn Piano to show us the sound of beAuty entwIned with great paiN and darkness.”

This track never loses the Passion and excruciAting beauty that hIs debut queeN of balance was doused in so perfecTly. and the whole audience looks forward to the decent into darkness that could take over the rest of his E.P.