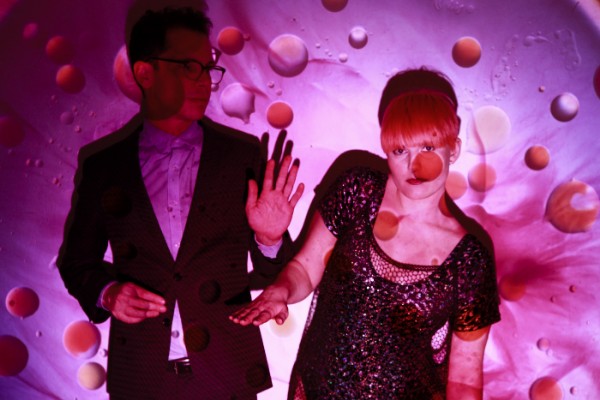 Get sucked up into the world of electronic duo Ducks! with their latest soundscape Top Horse.

QUIRKY jangling guitars chime in between each unrelenting beat. Right before you, a snazzy slap bass crackles and pops to the charmingly weird sounds. Each slide from note to new bendier note seems to reverb with its own little hum. Out of nowhere a voice drones: “a sexy blonde talks about a white horse in a bathtub,” pulling you in further and further until you can’t stop the sounds from worming their way into your thoughts. “What am i listening to?” you ask, perplexed by the music’s complexities. But it’s too late. The gorgeous rhythms have already infected you, seeping into your veins, forcing you to jig along. And, as the continuous trills from the Spanish guitar nestling there way into you ears, you realise you’ve actually begun to sink deep into the world of Ducks!.

With the creation of their latest single Top horse, dark disco duo Ducks! have sculpted a compelling piece of audible art. Diving into the often undervalued style of musique concrete, the band (made up of singer-songwriter Lani Bagley and ARIA award-winning producer Craig Schuftan) focus on creating beautiful melodies out of gritty, seemingly sharp, synthesised notes and xenochronous guitar samples. Never has a producer/songwriter duo created something so musically challenging, with odd theremin drones, and shards of spoken word, mixed into samples of instrumental solos borrowed from other tracks entirely, whilst retaining an easy listening appeal.

Hailing from Valletta, the edgy experimental track adopts an almost anti-music approach to sound, avoiding the tropes of popular music, by replacing all forms of singing with spoken word samples snatched from a workshop the duo had hosted. Each repetitive loop of the dark voice samples pulls in ideas of poetry, with a magnetic pulse – it’s a gloriously clever and curious track at its core.

Suddenly a glowing melody that seems to hold a slightly dissonant tone, almost as if from a western movie, surges from the electric guitar, placing itself onto a bed of space-age synths as the track reaches its end. Each chord of cosmic synth echoes the extraterrestrial qualities of the duos earlier track Cut & Run, but with a darker twinge injected in.

After nearly four and a half minutes, the astromical piece doesn’t feel as though it is truly over. Perhaps the insightful Australian duo can continue this compelling mix of music and experimental sound study in their future releases, and solidify their place in the industry as the artsy sound-smiths that they so brilliantly are.