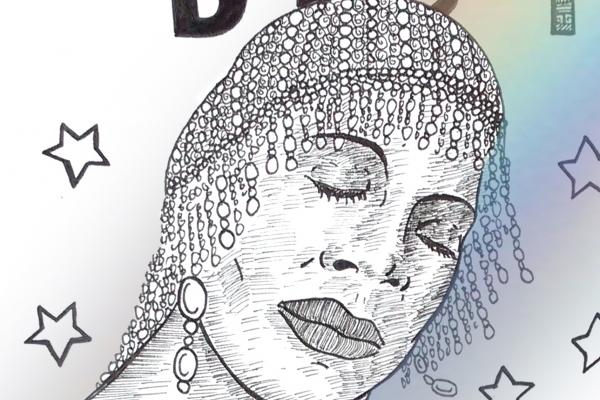 Visual artist Josef Cabey reflects on both the musical and personal influence that iconic singer Sylvester had on him as a young gay black man, while local historian Alf Le Flohic shares a few memories and tracks down Sylvester appearing in Brighton during the 1980s

I first became aware of falsetto icon Sylvester in 1978 with the success of You Make Me Feel (Mighty Real), and the video being shown on Top of the Pops.

I was fascinated but at 13 I was already aware that men were not supposed to look, act or sound like this. I was quietly gutted the following week when Top of the Pops dropped the video and the all-female studio dance troupe Legs & Co bobbed around to the song instead. Looking back my reactions were a rather massive clue about my developing sexuality… but enough about me.

Sylvester was born in Los Angeles in 1947 and his family were devout Pentecostal Christians. This was great for singing gospel songs at church, not so much when you’re a rather obviously gay young boy. He stopped attending church at 13 and left home at 15.

He fell in with a group called the Disquotays, young black gay men who liked cross-dressing and partying, before moving to San Francisco in his early 20s. His talent was recognised while performing with the drag troupe The Cockettes. That was followed by the formation of Sylvester & the Hot Band, who found themselves as the support act for a young David Bowie one night.

Sylvester became known as ‘the Queen of Disco’ in the late ‘70s, with his back-up singers Two Tons O’ Fun (Izora Rhodes and Martha Wash). As The Weather Girls in 1982, they had a huge hit themselves with It’s Raining Men.

Sylvester had more UK chart success in early 1982 with Do Ya Wanna Funk, co-written with his friend and electronic dance music pioneer Patrick Cowley. They had been on a world tour together the previous year, and Patrick had complained of feeling ill. In November, just as he was about to go on stage at London’s gay superclub Heaven, Sylvester was informed of Patrick’s death from AIDS. He told the crowd what had happened and performed the song in his honour.

Sylvester also made appearances in Brighton during the late ‘70s and early ‘80s, at venues with great names like Sloopy’s and Coasters. In 1984 he appeared at Bolts, the gay night at Sherry’s, 77 West Street.

Photographer and local resident Bill Short interviewed Sylvester for October Gay Times. He remembers: “After the show, which was at a straight club in my hometown, he asked me to take him out on the gay scene.”

Sylvester had found his appearance criticised by sections of the gay community over the years and commented during the interview: “When I first was a hit over here, I used to wear sort of dresses because that was the sort of drag that I was into at the time – we all wear drag whether it be dresses or leather or jeans.”

Sylvester also appeared at the Beverly Hills, 54-55 Meeting House Lane in October 1985. To quote a review of the venue that year by Peter Burton for Gay Times: “The centre of town’s main attraction has to be the recently opened Beverly Hills. This elegantly designed nightclub has developed the reputation for being the week-round place to go. A gallery furnished with sofas and chairs surrounds the bar area and dance floor and offers a handy and cruisy vantage point. Cabaret – fairly unusual in Brighton – is a regular feature.”

The cabaret, for example, had been Miquel Brown on Friday, August 2, famous for her 1983 Hi-NRG anthem So Many Men, So Little Time.

Phil Monteiro-Sampson remembers: “I saw Sylvester twice in Brighton, at Bolts and Beverley Hills. He was a lovely guy. I was resident DJ [Beverley Hills]. Sylvester was FANTASTIC. The manager was annoyed as he didn’t arrive for a sound check but within 30 seconds he was sounding fantastic. To cover the cost we had to charge £4 entry, so turn out suffered as no one ever wanted to pay entry fees, which seems crazy now.”

UK label Dominio Records must have sensed the love for Sylvester here, as a Brighton Summer Mix of Do You Wanna Funk hit the record shelves in 1986.

Sylvester’s boyfriend Rick Cranmer died of AIDS in September 1987. Just over a year later Sylvester died of AIDS, aged 41. He left all future royalties from his recordings to two HIV/ AIDS charities.

Our own gay falsetto singer Jimmy Somerville paid tribute with a cover of Mighty Real in 1989. The video features images of Sylvester and people dancing in the cosmos – which seems like the perfect way to imagine Sylvester evermore.

Like many who were into pop music at the time, I first encountered the powerhouse of fabulousness who was Sylvester James in 1978, when the disco anthem You Make Me Feel (Mighty Real) went to number eight in the UK. For my 13-year-old self, seeing Sylvester on TV evoked mixed feelings.

As a young black boy with relatively little experience outside of the specific community I grew up in within Hackney, I pondered, why does this man sometimes wear a dress and make-up? However, I also thought: Wow, this person is fascinating, I really like him! Plus, those two amazing big women that he sang with could easily have been my aunties.

“[Sylvester] was a trailblazing black gay man who radically played with gender in a way that was really very risky for a performer at that time, and in doing so created space for others to more freely explore their own black queer identities today”

At that time my own sexuality had not yet surfaced in any meaningful way. However, there was something, just something, that drew me towards this flamboyant man with the soaring voice and the same skin tone as myself. I knew I loved the record, in fact at that time I loved all things disco and still do.

I had always felt slightly different to the kids I hung out with at school, but I was also obsessively creative and ‘arty’, and artist types were always considered kind of weird so that had to be it. Anyway, I continued to bop away to Sylvester and be in awe of that video where he descends the stairs of the club looking amazing. In hindsight yes, I did notice all the scantily clad men that were in the video too!

Fast forward a few years into the ’80s and I certainly now knew what had ‘panged’ in me when I first saw Sylvester. I was now out as a young gay man doing my thing, and very much a big Sylvester fan. After Mighty Real and his only other UK top 40 hit Dance (Disco Heat) I discovered some of his earlier material, some of which were better than the hits. I also discovered his incredible role as one of only a few black performers in ’70s radical drag troupe The Cockettes.

I was going out and shaking my stuff at clubs like Heaven to his HiNRG tracks like Do Ya’ Wanna Funk and Menergy and buying all the 12“ singles, remixes and albums. Sylvester became a real role model as someone who looked like me and was really out there being publicly and unapologetically gay at a time when this was uncommon, especially for black singers.

By then I was at art school and had begun to express myself more visually too, not quite to the fabulous gender nonconforming lengths of Sylvester, but I certainly remember in particular a wraparound garment that I had created for myself that prompted my mother to shout: “You are not going out of the house in a dress!”

I was devastated when Sylvester died of an AIDS-related illness in 1988 and certainly didn’t realise just how fully the same disease would impact on so many of my friends and acquaintances too as the next decade rolled on. In much later years I visited the AIDS Memorial Grove in San Francisco and seeing Sylvester’s name definitely brought a tear.

I think it’s very important that the impact of Sylvester is neither forgotten nor underestimated. He was a trailblazing black gay man who radically played with gender in a way that was really very risky for a performer at that time, and in doing so created space for others to more freely explore their own black queer identities today. Indeed, I sometimes wonder how Sylvester might have identified today had he survived. When Joan Rivers once referred to Sylvester as a drag queen, the response back was: “I’m not a drag queen, I’m Sylvester!”

Sadly, the most disappointing thing for me as such a big fan is that, somehow, I never saw Sylvester perform live. I’m not certain why this is, as I did see so many of his contemporaries. However, Sylvester will always remain an inspiration to me. I live in Brighton now, and as I sit here surrounded by my wonderful collection of vintage 12” vinyl, I can only say thank you to Sylvester for being there and making such a difference.