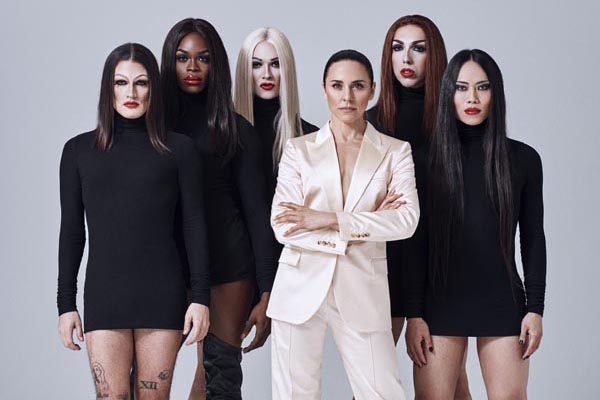 Two become one as pop history is made at Bristol Pride 2019 on July 13.

SPICE Girl Melanie C will perform at this year’s Bristol Pride festival as part of a unique world-colliding live show with party makers Sink The Pink. This exciting collaboration will debut on a tour around some of the biggest Pride events and festivals in the world, including Bristol Pride on July 13.

A tour from Melanie C and Sink The Pink is perhaps no less than you’d expect of a Spice Girl and a nightclub-turned-movement who (in their own fierce, fearless ways) have always taken the road less trodden.

A long-time ally and icon, the friendship between Melanie and Sink The Pink came to its most creative fruition last summer, when Mel appeared at the Sink The Pink co-founded festival, Mighty Hoopla, now they are back with something bigger, better and brasher than ever.

With the Spice Girls enormously-anticipated UK stadium tour this year, Melanie C is also working on brand new, completely re-energised solo material, while Sink The Pink continue to tell the next chapter of alternative UK nightlife with a mission brought together under the wider manifesto of community, equality, and change.

Melanie C said: “This is a bit of dream come true for me! I’m going on tour with Sink the Pink, the most inclusive, fun and fabulous club night in London and we’re taking their best drag queens round the world, for a truly special show. I can’t wait!”

Melanie C & Sink The Pink are the latest names to be announced for what is already shaping up to be the biggest and most diverse Bristol Pride line up to date. The team is celebrating their 10th Anniversary of organising and delivering the award-winning festival, which was named in the 2018 Global Top50 Pride Festivals.

Following last year’s record numbers, which saw 36,000 people attend the annual LGBT+ festival, Bristol Pride have already announced that they are relocating to the Downs this year, doubling their capacity and introducing new festival areas and events.

Sink The Pink will also carry on the party into the evening, performing a DJ set at the festival’s official Afterparty at the O2 Academy alongside energetic pop loving DJs Guilty Pleasures. Pride take over the whole venue for 3 rooms of music and performances. Bristol club night Don’t Tell Your Mother will be working with other DJ nights to curate a Neon themed room whilst LGBT+ BAME collective KIKI create a space for LGBT+ people of colour and friends to proudly celebrate.

Pride will again run for two weeks with events taking place across the city from June 29 until July 14 with an array of events including the Pride Dog Show, Circus Night, Comedy, Film Festival and Theatre.

Pride Day will start with the Parade march in the city centre, which last year saw 12,000 people take to the streets in a colourful, empowering display to showcase visibility for the communities and to declare loudly and proudly that hate and prejudice doesn’t belong in Bristol. A message more important than ever this year following a 23% increase in LGBT+ hate crime in the region.

Organisers also hope to see the city come alive with Pride for their 10th Anniversary and are calling on businesses to get behind the celebrations and to support Bristol’s biggest community festival to happen, like the University of Bristol who have sponsored the festivals new shuttle service running from the City Centre to The Downs on Pride Day.

Robert Kerse, Chief Operating Officer and LGBT+ Staff Network Senior Champion, said: “The University of Bristol is really happy to be sponsoring the shuttle bus service to The Downs for this year’s Pride Day event. I know everyone is really excited about the new bigger venue and we’re pleased that we can help people get to and from the festivities.”

£7 Supporter Wristbands for Pride Day are available now. As well as keeping the festival going, they offer fantastic money-saving rewards on Pride Day including free travel on Pride Day with First Bus (Bristol Inner Zone) and free access to the new Pride Shuttle Service that will run throughout the day.

Wristbands also get you money off on the festival bars and food stalls along with other partner bar venues too. Wristbands are available now from Bristol Ticket Shop. Donation entry options, VIP tickets and a limited number of Day+Night wristbands for multi after party entry are also available.