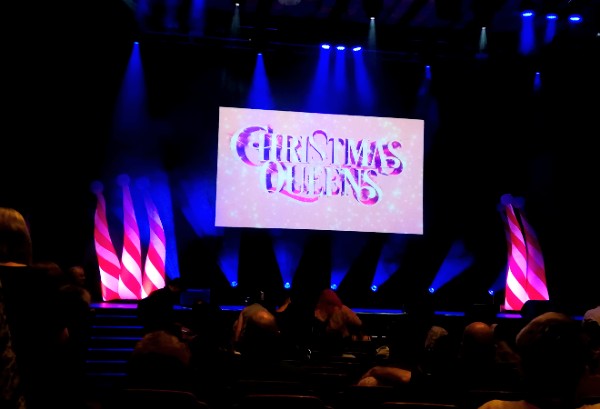 The girls from RuPaul’s Drag Race welcome us into a winter wonderland, with a performance that’s “Gayer then a but plug snowglobe,” at the Brighton Dome.

“THIS is gonna be Gayer then a but plug snowglobe,” laughs the cheeky Bob the drag queen, as the campest Christmas show around transforms the Brighton Dome into a winter wonderland.

Just before the clan of O’Haras, season 4 sisters and silent but deadly Kameron Michaels, take to the stage for an on key kiki, the comedy queen’s sharp wit and wonderfully terrible rendition of a Brightonian accent warms us up like kick of cinnamon in a hot chocolate, making us as excited as kids on Christmas eve for the show that is about to take place.

Bob’s new to this hosting game, replacing the tour’s usual conductor Miss Michelle Visage (she’s away performing in the West end musical Everybody’s taking about Jamie at the moment), but she proves she was most certainly born for this gig, with jokes flying here there everywhere and she introduces us to the gay Christmas of our dreams. Don’t worry, they’re all landing well too.

Speaking of here there and everywhere, season 4’s favourite showgirl Phiphi O’Hara just can’t seem to get any of the steps down throughout the group dance number that swiftly follows Bob’s cheeky introduction. Red in the face, but taking her blunder with good humour, the queen’s expressions are following suit of her legs, contorting themselves into all kinds of hilarious positions as she fails to hit each step in time with the other perfectly coordinated queens. Season 8’s Bob, season 4’s winner Sharon Needles, fellow season 4 sister Jiggly Caliente, and season 10’s first, second, and third alternates Eureka O’Hara, Asia O’Hara, and Kameron Michaels, may not be known for their dancing skills, but with this performance they should be. In all fairness, the queen wasn’t on the original bill for Brighton’s lineup – both her and miss Jiggly Caliente were called in as replacements for Manilla Luzon (she’s away due to prior commitments to the upcoming All Stars 4 series), and Blair St Claire (who was also missing in action from her scheduled appearance at Drag World UK back in August). But that little hiccup is soon thrown out of the window, never to be remembered again, when the spotlight hits and she opens her mouth to sing. And boy can she sing.

Out of this beautiful little queen bursts the voice of a true Mariah Carey level diva songstress, as she perfectly strings the sounds of the classic festive track The Christmas song (chestnuts roasting on an open fire), with a stripped back sort of soul feeling. Hitting all the right notes and more, the queen is shining like a golden star guiding us to the very peak of festivity’s joy.

And from one season 4 queen to another, the ooky spooky Sharon Needles takes Christmas and flips it on its head, as she begins to sing her own festive tune from way back in 2016. “We’re gonna pump it this party all night,” the campy queen belts to the concerto of white confetti that clouds the stage around her, tongue (firmly) in cheek for the festive club bop Snow machine. And who would have thought that the crazy queen from way back in season 4 would be singing LIVE at a Christmas show? But Sharon keeps things Sharon, with innuendo here and double entendre there, wrapping up snow and… other types of white powder into one light and delightful performance.

But the best performance, well Eureka I’ve found it. Sharon may be spooky, but there is another queen coming for that title, as season 9 and 10’s Eureka O’Hara brings an element of darkness to the stage for this merry yuletide. Dressed head to toe in the most beautiful potato sackesque oogie boogie cosplay – giving me flashbacks to Batman‘s Scarecrow, the queen who once destroyed her knee by jumping into split is not here to play (she’s here to slay), prancing the stage, and fighting Santa Clause, all the while lipsyncing perfectly to our favourite eerie yet festive class The Nightmare before Christmas. Mixing some spoken word and operatic lipsyncing, she is giving us Christmas with jingle bells on. And just when i thought the queen was at peak brilliance, she takes off her beautiful potato sack dress, dropping it to the ground to reveal a bedazzled body suit and crazy uptempo dancing with a dash of Demi Lovato. It’s safe to say this queen’s gig is the crowd’s favourite so far, as all at once we leap to our feet and stomp the house down, erupting into a giant roar once Eureka leaves the stage.

This roar swiftly turns into a standing ovation, soon after the whole lot of fabulous queens, that are giving us opulence with their dripping in blue jewels lewks, finish their final group number. But, like a wonderful gay angel, Bob returns to quench us of our thirst for more more more. “That was going to be our last song, but we’re going to give you a Brighton exclusive and do one more song,” she laughs, but we all know the queens were always going to come back for one more track.

“Have yourself a merry little Christmas,” the backing track choruses, whilst the queens’ smiling faces warm us like hot chocolate on a snowy winter day. Circling the stage like a tornado of fabulocity ready to take us away to a gay wonderland, the beauties are giving us the best Christmas present ever, and we’re loving it.

Sitting in amongst an overflowing audience of sparkling sequence dresses and optimistic faces, painted lavishly from corner to corner, i can honestly say I’m now looking all the more forward to this Christmas. From the hilarious Bob, with her feeble attempt at a Brightonian accent, to Eureka’s kick ass spooky dance number, and Jiggly’s cheery rendition of her own track Ratchet Christmas, the queen’s had us practically bursting with excitement for this festive season. And, with their perfect, gag worthy performances, I now have a new found appreciation for Phiphi and Eureka O’Hara – they are truly something to behold live. The Queens have most definitely made the yuletide gay, and like Bob herself says at the very end of the show, with this show we will all “Have a happy draggy Christmas.“