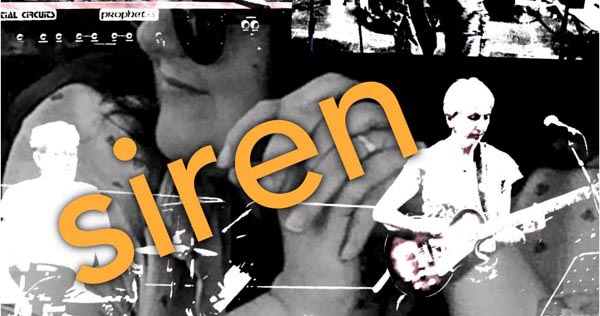 “For all those abusers not yet named, we warn you, your days are numbered,” challenge the all female eighties punk feminist band Siren, as they stir us into a revolution with their catalogue of anarchistic anthems at The Brunswick.

AH, THE EIGHTIES. A wonderful time full of punk-ass rebellion; an eclectic jungle of musical genres and looks. And though that period of discourse and glorious violent freedom is long behind us, remnants of the era emerge every now and then in sudden pockets across the world. And hidden between the walls of The Brunswick for one wonderful night in Brighton, one of these pockets exploded.

On a lazy Sunday night, in the shallower end of Hove, a humble little room was sent way back in time to the very cusp of eighties punk.

Before us in this sardine can of a room, that was practically overflowing with starry-eyed onlookers, stood a powerfully stoic group. The all women Lesbian feminist 80s punk band Siren were glued to the stage, like statuesque trees, breathing out a gust of political discourse and sweet sweet anarchy with every sound their instruments sung.

From new anthems of revolution MeToo, and Love is allowed, they began bleeding the

that their older music was all about – only now packaged up in a beautifully refined style of classic rock, that harkens back to the days of Johnny B Goode with Jane‘s pretty little guitar twangs and new vocalist Emilia’s jazzy tremolo vocals.

“The next one is a tribute to Tarana Burke – the black activist that started a movement in 2006 that really took off last year,” bassist Tash introduces, leaving us on a cliffhanger with “Hashtag…” before an almighty roar of “MeToo,” kicks off the combative explosion of driving bass.

Marching drums thudded heavily, calling us to join the war on misogyny, as the striking MeToo flowed in through our ears and burst in our brains. As the heavy, mind bending, floor shuddering drums and bass pair roused us into a march of our own, I couldn’t help but become inundated by the words the mistresses of rock n roll had told me during our interview months before.

“For all those abusers not yet named, we warn you, you days are numbered,”

“We wrote a song called pinup, in the early eighties, around the sexual exploitation of women,” I remember Jude told me. “And its amazing to see that now, all the sort of ideas that we as feminists were talking about are being talked about by younger women, by older women, and by so many women.”

Jude continued: “Certainly that [#metoo movement] has influenced our song. But that’s nothing new for us. Most of our songs are always been about oppression in terms of lesbianism, of being gay, or being women.”

“For all those abusers not yet named, we warn you, you days are numbered,” the velvet voices of Emilia and Jane cautioned, bringing me back to the revolution that was emerging on the stage.

A dark twang of guitar shoots out like lightning from the stage, calling in a crackling thunderstorm of drums and ebony sounds, as they transitioned to the next grand musical story.

“In our red and green Republic of Brighton, we sometimes forget there are places in the world where you can’t be gay or Lesbian,” says Tash, giving way to the poetic depiction of drummer Debs’ escape from her original home of New Zealand to England in hopes of freedom. As the hard-hitting track known as Love is allowed creates a storm of beautiful rock n roll, i am once again reminded of what the band had told me not so long ago.

“There are lands where who you love could get you locked in jail. We can’t let things slip backwards; we mustn’t fail,”

“There are around 75 countries where it’s illegal still, and some where you can be put to death, for being gay. We can never be complacent that gay rights won’t be taken away,” I remember the songstress’ telling me. And they cannot be more right, especially with the situation in America at the moment dominating many of our worries. We can never give up the fight, it would seem. But with each thudding note of clean bass, each wonderfully jazzy vocal trill, each carefully crafted profound word story the group bleed, Sirens give us hope that maybe this struggle for basic humanity will gradually become easier.

“One of our new song is called love is allowed, and It’s about mine and Debs’ life, you know, being brought up in south Africa where at that time you could not be gay, you could not be a lesbian,” I remember Jude explaining to me, revealing the harsh reality of society’s handling of LGBTQIA+ rights across the globe. “And she chose to live here, because she could live where love is allowed. That’s why we say in our song, you know, ‘Daughters be aware of the freedoms that we have won. Children be alert when they say our work is done. There are lands where who you love could get you locked in jail. We can’t let things slip backwards; we mustn’t fail’.”

The headfirst dive into such harrowing topics ironically was wrapped up in a neat bow of pristine guitar tones and neat playing; there was none of the hardcore sketchiness of punk rippling through the stage visually, none of the cut throat guitar shredding or wall of distortion that so easy becomes muddied and awkward, but rather a punk ecology oozing from every word. Even down to the little jig each soldier on the stage seemed to erupt into when the chorus hit, everything was refined and faultless. Yet, it was easy to see how the shadow of the rebellious four piece from the eighties still kept close by each of them as they brandished audible posters of social change and pointed rather directly at a decomposing mysogynistic ideal.

“At one gig we were at, Peter took his d*ck out and started w*nking on stage,”

Although the politics was practically bubbling in hot fury throughout the punk warrior’s performance that night, their wonderful sense of humour, and light tales of love, were injected into each song too, just to keep it all from spilling too far into darkness.

“Anyone whos ever undergone treatment for cancer, will understand the terminology sounds like something out of a spy thriller. So you’ll probably recognise the theme for this one,” joked Tash, opening the stage to the dark rumbling theme from the James Bond movies. Swiftly this sultry guitar, and humming bass line, twist into bumbling up-strums and playful off beats, firmly adding ska into the bands’ cocktail of sounds. And the musical-esque jumping notes of Roller-coaster ride flowed through the air with a light beauty, drawing us into our own jigs of cheer, beautifully decorating the song’s poignant tale with funky flairs. Just as the ska quips and stop start drums became a mirror to the energy of the performers, refined guitar solos started to sprinkle that exta little kick of spice into the mix, throwing us into the powerful flavour overload of a chorus. This flow of energy painted the room from wall to floor in solidarity and overall joy, with each passing note.

Speaking of paint, Jude and Tash were actually quite the gangsters back in the day…

“The next one is an old favourite with a difference. It harks back to when we were never without a spray paint can in our hands, ” Tash laughs, introducing us all to the bluesy (duh) 50s rock n roll sounds of Graffiti Blues. Every soft electrolysis of chords, every slide and trill, even the cheeky harmonica solo, brought up images of American diners and the days of John Waters‘ Hairspray. It was magical, toeing the line between cheesy and wonderfully sweet. As they neatly layed out in front of us the story of punk teenage rebellion, decorated with bluesy licks and subtle glows of country scales, it reminded me of the time guitarist Jane kicked off at an old gig once…

“At one gig we were at, Peter took his d*ck out and started w*nking on stage,” I remember Jude revealed, leaving a canvas of befuddlement glued firmly to my face.

“What Jane in the band did was crawl around to the back of the stage and just unplugged the main PA switches, and everything went ‘wuuurg‘, “she laughed. “We had to run down the road. We had quite a few spats with, you know, the anti-piranha league who said, you know, I don’t mind the feminists, but I f*cking hate the lesbians,”

Spilled from the very heart of Debs, Tash, Jude, Jane, and Emilia, the powerful allurements stirred feelings of revolution in all of us gleeful listeners. With every refined note, every imporovised bend from the bass, the songs became ever more heartfelt and engaging. And, despite the short amount of time the band actually had on stage, they seemed to leave behind a glow of wonder and a feeling of a revolution amongst us. And why they are not selling out the o2 arena right now is beyond me, truly.