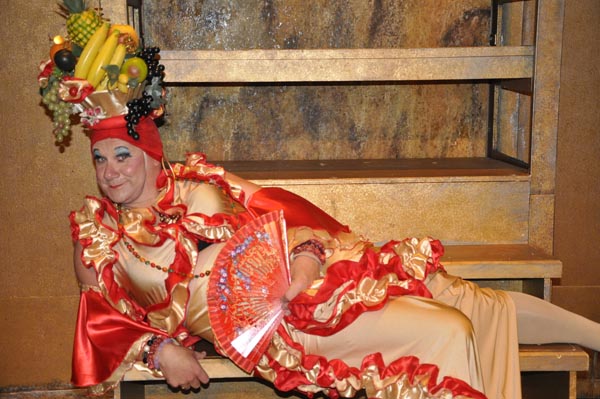 Many will know Jason Sutton through his outrageous alter ego Miss Jason, without doubt the campest creation on the UK drag cabaret circuit at the moment. Jason arrived in Brighton in 2006 via a career in local politics on Portsmouth City Council and Hampshire County Council where he was political assistant to Lib Dem Baroness Emma Nicholson. The thought of Jason doing a maiden speech at council or scuttling round after Emma ‘with the butch voice’ Nicholson is quite surreal. I can feel a musical coming on!

Jason started doing drag after an early encounter with the late great Phil Starr who he saw working at the Old Vic in Portsmouth.

“I thought Phil was wonderful. After the show I cornered him and said I was working on an act and would like some advice. Phil asked for my telephone number and said he would contact me. The next day, which was a Monday, Phil called and said I would be working with him two days later at the Queens Arms in Brighton at Phil’s Piano Bar. I couldn’t believe he’d taken the trouble to call and panicked as I didn’t have a pair of tights to my name never mind an act to perform! I came to Brighton on the Wednesday and the rest is history.”

After years building up his act on the gay scene, Jason took his first steps into mainstream pantomime in 2010 playing Dame Trot in Jack & the Beanstalk in Redhill, opposite magician Paul Daniels and Debbie McGee. In 2011 he played Widow Twanky in Weston-Super-Mare and in 2012 Dame Able Mabel in Peter Pan in Derby opposite EastEnders star Larry Lamb. This Christmas he teams up with Dave Lynn to play the ugly sisters in Cinderella in Woking for First Family Entertainments. One famous producer remarked to me once that Jason’s panto performances reminded him of the late great Dockyard Doris. Praise doesn’t come any higher.

His TV credits include facing down Anne Robinson on the Weakest Link Drag Queen Special and appearing for a week on Channel 4’s Come Dine With Me where he surprised the other contestants by hosting his dinner at the end of the week in full drag.

Jason dipped his toe into serious theatre in 2012 playing Donald in Kevin Wood’s production of the 1970s drama, Boys In The Band at the Theatre Royal in Brighton. Boys In The Band was one of the first dramas in the 1970s to tackle homosexuality head on and the resulting film, which introduced a group of gay characters to an American film audience for the first time, is considered to be a milestone in queer film history.

So, just seven years after arriving in Brighton Jason finds himself playing the leading role in Peter Nichols’ play, Privates On Parade at the Theatre Royal in Brighton from August 22-31.

Described as ‘a play with songs in two acts’, the drama is set around the activities and exploits of the fictional Song & Dance Unit South East Asia (SADUSEA), a mostly gay British military concert party stationed in Singapore and Malaysia in the late 1940s during the Malayan Emergency. The script draws on Nichols’ own experiences in the real-life Combined Services Entertainment, the postwar successor to ENSA (Entertainments National Service Association).

Privates On Parade follows Steven Flowers during the Second World War, who embarks on a  journey of discovery as he is sent to South East Asia as part of the Song & Dance Unit, with Captain Terri Dennis (played by Jason), his commanding officer. The Captain is a flamboyant, dare I say camp man, and it is with his help he realises what it takes to be a man as he cross-dresses and entertains audiences with performances imitating the likes of Marlene Dietrich and Carmen Miranda.

To be more precise, Privates On Parade is a comedy – a farce with musical score composed by Denis King. Most of the numbers are performed by Jason in different guises. The show was premiered in Stratford by the Royal Shakespeare Company, before receiving its London premiere at the Aldwych in 1977. Successful revivals in 1979 and 1982 in Derby, the Donmar Warehouse in 2001 and the Noel Coward Theatre in London in 2012 are testimony to the ongoing popularity of this camp romp.

“I’m thrilled to be headlining in my home town of Brighton. It’s terrifying for me to think that one day I’ll be on stage at the Queens Arms and then the next starring in this wonderful production at the Theatre Royal. The last year has been very important for me and I learnt so much working with Dave Lynn and the other entertainers who appeared in Boys In The Band last year. I really want to thank them for the help they gave me. The Privates On Parade team have been like a family to me and have been so gracious in building my confidence.

“The director, Carole Todd, the producers Kevin Wood, Tim Anscombe and Stephen Holroyd and choreographer Damien Delaney, who has got my rather ‘fuller’ figure to move in time to the music, have all been so supportive, as has my co-star Eric Potts from Coronation Street. I’m so looking forward to our opening night.”

WHAT: Privates On Parade