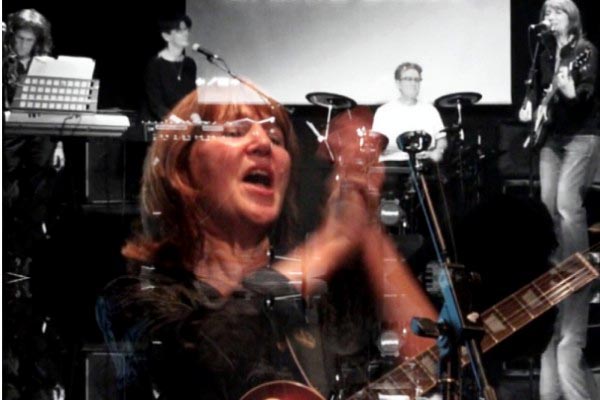 After a thirty year break, popular all female feminist eighties band Siren are back performing together, as radical as ever.

THE five piece rockers talk to Ray A-J about reforming and the time they were almost beaten up before a gig in an Amsterdam car park.

“We feel very accepted, and very easy, to be back on the Brighton music scene again,” a strong, charming lady known as Jude beams as she hands me a warming cup of tea. “Brighton is the right place for us, because of the diversity and mix of different styles of music,” she enthuses, passing over a freshly toasted crumpet.

I was sitting in a beautifully serene kitchen, across the table from Jude, Debs, and Tasha, of the feminist, all female, Lesbian eighties punk band (and theatre company) Siren. After nearly thirty years away from music, the straight-talking progressive five-piece, that smashed down boundaries on the eighties music scene, have reformed once again, and exhilarated the audience at their comeback gig in Brighton on September 21.

“It sort of feels like we’ve come home,” the keyboardist smiles.

As Jude recalls, the five piece were inseparable in the 80s, practically living and touring together for just over ten years. But, as their jobs grew and lives changed, the band decided to call it quits for a while. But, after reforming for a short time in 2015, and then again in 2016, the band known as having A Punk mentality with an eclectic taste in music just couldn’t stay away from each other for too long.

“Five years ago, we suddenly had the impetus to write music again – To express some of the political feelings we were all having,” Jude explains. “We wrote during the Thatcher era, and that was great material because it was so horrendous, and we sort of find ourselves in a bit of a similar situation. Especially now with where the Conservative party is taking us, where Trump is taking us, there is so much material to write with. And we had so much to say, that it sort of just felt natural to start writing it in songs, because it can be more humorous, it can be lighter, but it can be digging,” she enthuses. “Before, we were much more interested in the lyrics. But now we are more focused on the music as well.”

Made up of members from similarly challenging bands Devil’s Dykes and Bright Girls, Siren fought  and composed through the politically rich climate of Thatcher’s Britain, bringing feminism to the stage, and proving it was awesome to be gay.

Back in the eighties, the then four piece were a force to be reckoned with, and caused quite a stir with audiences. But sadly, not everyone was so keen to hear the group’s ideologies.

“We got beaten up a couple of times, when we were on tour.”

Jude explains: “When we were performing in Paridiso, in Amsterdam, we were attacked in a car park. It was about 1am in the morning, we were trying to get everything inside the venue because we were performing on stage at 2am – something we would never do now,” she laughs.

“Tash and I were unloading our stuff in the car park, Jane and Debs were at the stage door, and there were some bouncers on the door. These guys came into the car park and pulled knives on Tash and me.  The bouncers saw them and slammed the doors locked, so Debs and Jane were inside and we were out.”

“We didn’t even know what was going on, because we were on the stage”, Debs recalls.

Before I knew it, talk about fight or flight, I was in the van with the doors locked leaving Tash on the outside,” Jude continues. “Tash was amazing; she was a brown belt in karate. She stood with the van behind her, and just kicked out with these amazing karate kicks.”

“I kept them off until they came round. They eventually came round and into the car park”, Tash confirms.

Thankfully the men who had attacked them had run away, and the band were left with mere bruises. Unfortunately, this horrific event was not a one-off for the group though.

“But that was not an unusual thing. We seemed to provoke, just by being there. Just by being a womens’ touring band and theater company. And it was always in car parks; somehow it would be like we were asking to be beaten up”, Jude tells me.

But why were the band treated so unfairly? “We were threatening; what we were saying was threatening. And appearing to not need men in our lives. That was a big statement.” Debs explains.

“We got beaten up a couple of times, when we were on tour.”

Despite the horrid violence and rampant prejudice, the band were sometimes subjected to, they didn’t stop pushing boundaries. And thirty years on, their political attitude hasn’tt changed.

“And the politics is still as radical as ever,” Tash laughs.

Jude adds: “What interests us now, is exactly what interested us in our twenties and thirties. We live in a world that needs us to participate actively and challenge.”

One things for sure, they won’t be making a song around backache anytime soon.