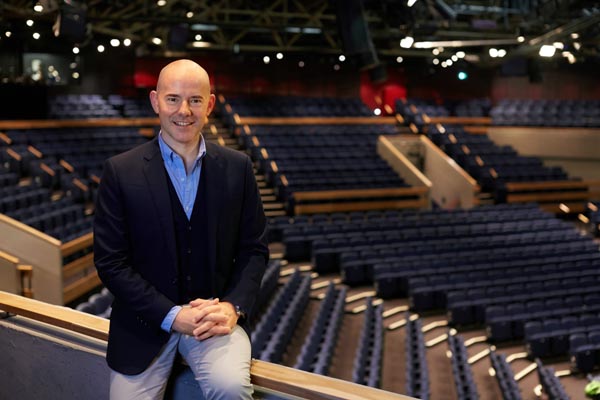 Two-time Olivier award winner Daniel Evans talks to Brian Butler about being a child TV star, working with the iconic composer Stephen Sondheim and giving notes to an opera diva.

BROUGHT up in the Welsh valleys Daniel Evans – current artistic director at the Chichester Festival Theatre –  was well grounded in speaking and singing at both chapel and Eisteddfod before he was 10.

His first steps were as 12 year old TV child actor. “Luckily I grew up  speaking Welsh and the Welsh language tv Channel 4 had just started broadcasting. They came to my school and I auditioned. In one series the Eye of the Dragon I got kidnapped and taken to Hong Kong and we actually went there to film” he says.

Many teenage roles followed and then at 18 he got into the prestigious Guildhall School of Music and Drama in London’s Barbican.

Even before the end of the course Daniel was offered a one-year contract at the Royal Shakespeare Company in Stratford upon Avon, but as he had enough credits on his course he still graduated .

He remembers his time at the Guildhall fondly “on campus you had singers and instrumentalists. It was a great atmosphere. The training on how to look after your voice and body was second to none.”

His two Olivier awards were earned in shows written by Stephen Sondheim – Merrily We Roll Along and Sunday in the Park with George, which also took him to Broadway.

So how is it to work with the genius  Sondheim? “It’s very scary – he is no slouch. he is very firm about what he wants but it’s a great privilege to work with him and learn from the horse’s mouth in one-to-one sessions. He’s also very generous and was very supportive of me.”

Daniel having started so young felt he was ready in his 30s to direct. “I’d always been interested in the whole project of doing a show – lighting, design, text. “Acting is wonderful but also frustrating: you just work at your piece . I need to have a more creative input into the whole production.”

His seven years as director of the Sheffield Crucible were highly rewarding – Sir Anthony Sher starred in his first production An Enemy of the People, and the theatre was named Regional Theatre of the Year twice in a row – an unequalled feat.

Daniel is very strong on the relationship between a theatre and its various “communities.” Coming to Chichester he had preconceptions the audience demographic would be different from the urban landscape of Sheffield. “But there are lots of socio-economic problems along the south coast and the craving of old and young to be involved , to have connections is why our learning and education outreach work, including dementia and mental health work  here is so important.”

Last year’s production of the marvellous Mike Bartlett play Cock did raise some eyebrows among some of the stalwart theatre-goers. “They couldn’t bring themselves even to mention its title, but a new audience from the university came to see it.”

“I want to make the theatre a place for everyone . This theatre was built by the community for the community. And some people have been attending for 50 years. There is of course a rich theatrical; heritage here  and when the Queen visited recently she recalled seeing the great actor in Uncle Vanya – there’s still an Olivier inheritance here.”

So how does the year-long programme get put together? “There’s always got to be a balance amongst the different audiences and different times of year. I’m constantly having discussions with directors and actors about their ideas of what we should do. Pieces float together . Sometimes things can’t fit in and I like to surprise people too.”

He’s directed as many plays as musicals but the musical theatre really attracts him. “There’s something about the release you get from singing – it’s different from acting. That’s true of directing too.”

When we speak he is hot foot from having directed the musical A Light in the Piazza, with opera legend Renee Fleming. “I have never known dedication like it . She knew all the dialogue and songs on Day One . She is very happy to take notes and is a brilliant company leader . The show will go later in the year to Los Angeles and Chicago.”

Would he like to act again? “yes, but nothing is shouting at me – more Shakespeare and more Sondheim but I’m a bit young for most of his parts.”

A new initiative at Chichester is the introduction of a 50/50 gender balance. “We are holding the mirror up to nature as Shakespeare said so we should reflect the world as it is. As a gay man I know how important equality is.”

Does he get involved with all the productions once they are running? “Yes I go backstage and talk to people and to the directors. I like to give feedback. It’s a hard part of the job. Working with a director like Sir Richard Eyre is great. His work is so wonderful.

Would he give Sir Richard notes if  it was necessary ? “yes, I wouldn’t be afraid to.”

What advice would he give a young  Daniel? “Not to be worried if people don’t always like what you do. Have faith in what you are doing. “He’s certainly showing that in his highly successful tenure at Chichester.