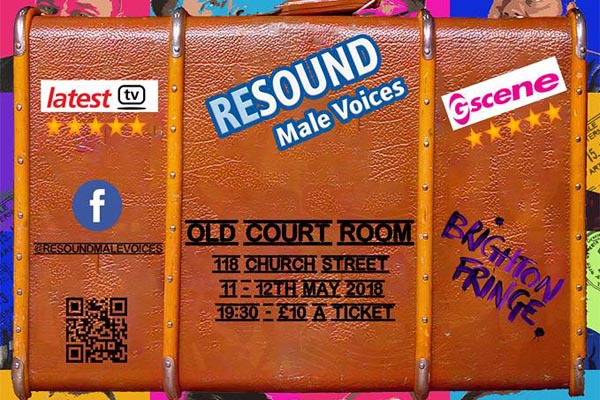 When 17 men from a gay men’s choir get stuck at the airport with constant delays and very annoying tannoy announcements what do they do to pass the time? Well, sing of course.

LUCKILY they are at the departure gate with musicians and a conductor so what can go wrong ? Resound, the Hove — based singing group are at the top of their form in this short, funny, quirky show of songs related to travel – well some of them anyway.

Kicking off obviously with Come Fly with Me, and Those magnificent men in their flying machines, they show off their tonal qualities and terrific harmonies to great effect.

Interrupted mid-song by a further announcement of flight delay, they change singing gear and produce an ominous version of Let’s Face the Music. None of the songs were announced and there was no programme for the concert but sitting behind the conductor Stefan Holmstrom I was able to get some of the titles from his score!

Two pieces by Poulenc were beautifully put together and followed by a haunting version of The Only Living Boy in New York. A further 2-hour delay brings angry reactions and the hilariously accurate Cheap Flights.

Rudyard Kipling’s hauntingly beautiful Seal Lullaby, set to music by Eric Whitacre shows off the subtlety of these guys perfectly, and getting free glasses of wine for a further delay, Resound perform one of their party pieces Stars – complete with musical accompaniment by stroking the rims of their drinking vessels.

Beat my Dog, a kind of Beebop quartet is another Resound favourite and In the Jailhouse Now provides not only line-dancing but also yodelling.

Tippett’s take on a spiritual Nobody Knows The Trouble I seen,  brings out their full choral colours, and about to board their long-delayed flight they send us off into the night with the Irish air The Parting Glass. As they sing  Goodnight and joy be to you all , we can’t but agree.

Excess Baggage takes off for one last flight tonight (May 12) at the Old Courtroom.