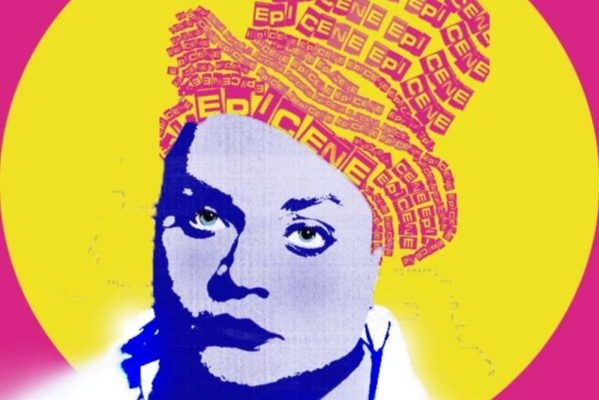 EPICENE – to be genderless. To have no discerning quality of male, female, or otherwise. To float outside of the binary. On a Saturday night, at the humble jam packed room of the Brunswick, we were introduced to a world where gender didn’t exist, a place where camp ruled, and the wonder of cabaret rippled through the walls. And it was Glorious.

Of course, this wasn’t musician Paul Diello’s first time at the Brighton Fringe. A firm favourite, the award-winning performer had hypnotized audiences before with the show back in 2018, and had since brought Epicene to the likes of, Pride, B right on Festival, El gee bee tea queue, and A Midsummer’s Night’s Fringe. But, donning his pink feathered hat, clad in a glittering sequence coat, Paul seemed to serenade us with the intoxicating magic of theatre, rebirthing the show.

Before we transport you to the world of Epicene, you ought to prepare yourself. Take the time right now to head on over to this page, and catch up with the first performance of the show at this year’s Fringe, written Brian Butler.

Ok, now that you’ve experienced the first act of the show, we can dive straight into things. Here we go.

“I’m just a girl,” a young voice sings, as the remaining seconds of the interlude fade, and we are snapped back into Epicene. “I’m just a girl, I’m just a girl.” The voice, growing all the louder as we reach our seats, and, mystified by the emptiness of the stage, search the room for the ringmaster of this musical circus. Off to the side, we see a slight sparkle of red, effervescent in the pulsing light of the room. Suddenly the red disappears, enveloped in darkness as our master of music returns to the stage, miming along to the track behind him.

“When I was young, growing up in Worthing, I thought I should be a girl,” Paul’s confession echoes, as he dances along to a song all about the feminine. “I’d be wearing pillowcases on my head. I used to get down on my knees and pray for Carol King’s hair, and every morning I’d wake, rush to the bathroom mirror in trepidation of this huge tuft of gorgeous wavy hair spouting from my head. And every morning would be the same. No luck. So the pillows became my long hair.” He tells us, taking us back to a time when he’d experiment with makeup too.  Suddenly, excitement sets his face ablaze as, off to the right, a grand present arrives, and from it sparkling ruby red shoes are released. Good girls might not wear Cha Cha heels, but Paul does. He’s kicking the air, spinning his heels as though riding a bike, whilst the humorous Kirsty Maccoll’s In These Shoes lays out a path for him to drive through. Delighted with the gift, he continues to prance about the stage, sound tracked by his childhood memories.

Earlier in the show, Paul had opened the door to his childhood, with each new song sprung from his lips mirroring the angst of his past. And now, to the wistful chorus of Carol King’s Too late baby, Paul is telling us of his own female trouble. “I was pretending to be all these beautiful women that I idolized, just with these pillowcases on my head. I’d never told anyone this before, except audiences yesterday, but as a little twelve year old queer kid, I actually used to bunk off school. I’d stay in my room all day, practicing with my band Amos – after Tori Amos. We were a great band, I mean all four members were me, but we were amazing. And I’d be wearing these T-shirts on my head, pretending I was each singer in the band. ” We laugh, half at the retrospective absurdity of wearing a T-shirt as hair, and half at our own selves and the familiarity of the story that as queer people we too have lived. But, the self-reflective laughing halts itself, once Paul’s sweet voice returns.

Swaying, almost as though he is channeling Aretha Franklin’s I say a little prayer in his melismatic tremolo, Paul falls deeper and deeper into the soft notes that surround him. Smooth and soft, like silk against his diva-esque tenor vibrato, the song drifts. A sultry sax hums its lullaby, as the golden harmonies from singers Em and Joanne wrap around the melodies that seem to leak from the piano. Everything is entwined in theatrical glee. And much like Paul’s memories, the music starts to tumble into the wonderful realms of Madonna.

“I’m obsessed with Madonna,” Paul enthuses, signaling a change in pace, as the musical landscape around him rearranges to match that of the 80s pop queen. “I’ll even forgive her for last week’s horrendous Eurovison performance.” Paul’s obsession with all things Madonna spans decades. Every chief moment in his life, he explains, has played out to the sounds of Madonna. “There was a lad in my class that I used to walk home with, we weren’t friends, we didn’t even speak to each other at school, but we lived on the same street so we’d walk home together. It was really awkward, we wouldn’t even talk on the way home. But, once we got to my house, we’d run straight up to my room and shut the door, put Madonna on, and fool around,” Paul laughs, before becoming submerged in the Material girl’s music.

As it turns out, at the tender age of ten, the thing Paul wanted the most, the one thing he desired for Christmas, the one thing he was desperate to get his hands on, was Madonna’s infamous sex book. “I just wanted to know what was going on in the book.” But alas, he never did get that book. Being the creative individual that he is, Paul had other ideas on how to peak into that book. “I used to draw my own porn” he laughs to us. “I was staying at my Nan’s house once, and I’d draw my little sketches of what I thought was in that book. We’re talking full on sketches, not just stick men. The next day I had to go home early. I couldn’t take the sketches home with me, so I quickly hid them at my Nan’s. Well, when I went back to pick them up the next day, there was a slight problem. They had vanished. To this day, I still haven’t got them back.” Paul tells us that thanks to this show, he managed to find some kind of clarity on the matter though. “My Nan was actually in the audience yesterday, and when I got to this bit I asked her. She went red.”

With his charming voice floating like a light mist through the room, we can tell Paul loves singing. But his striking confidence and general wit was barely visible when he was first starting out as a young teen. His lack of confidence was probably due in part to the fact that, when he was seventeen, a member of his audience actually died during his school performance as the titular character in Joseph and the Amazing Technicolor Dreamcoat. Yep. Died.

As the words leave his lips we all can’t help but fidget in our seats.

Not to worry though, because his off the cuff humorous tales of getting slaughtered on cheap wine with his first band Hession Drape – a naff name he confesses, but still better than the eventual switch to Rupert’s Fridge, are enough to warm us back up again. Comprised of himself, his brother, and reluctant friend Tigger, Paul tells us the band flung him into the sassy performer we see before us now. Singing Jefferson Airplane’s White Rabbit with his band for the first time was a healing moment for Paul. It transformed him from the shy teen that was so wrapped up in hiding his true from everyone around him. In this moment, the confident performer becomes reflective. He says he was drowning in a lot of shame when he was young. He was different, and couldn’t find a way to be himself, and still be accepted in the eyes of mainstream society.  But talking to us now, revealing his past, his funny antics, his wounds of self-doubt, and his eventual phoenix uprising, he says is so cathartic. It was at nineteen, when he moved to Australia, that Paul says he truly felt at peace with his identity. He realized he was not a girl, like he had previously wished when he was eight, or a boy. He’s just Paul. He wanted to do things society says only girls should do, and in this day and age, that binary construction is dissipating.

“Why do I feel the need to cry when people outside don’t know if they’ll live or die tonight.”

In his final song to us, Paul relives this feeling deeply. Stripped back, bare at the piano without his chirpy diva tracks, or his fabulously pristine band, he sings us a tune of his own.

With just Tessa’s weeping violin to join him, the soulful singer bleeds his pain, echoing the feelings of many a queer person. “Why do I feel like this skin is not mine” he sings, soft and solemn, “why do I feel the need to cry when people outside don’t know if they’ll live or die tonight.” His poignant words hanging thick in the air. It is in this moment, that we are reminded of the ongoing struggles we face, and of the rife injustices there still are in the world. Paul’s erudite creation, although fun and exuberant at times, is all the more powerful with his reflection on his past, and the mirroring of stories that as queer people, in one way or another, we have lived through too. With his story of evolution, Paul reminds us that we have a lot to celebrate too.

“Right, I think we should lighten it up a bit. It is a Saturday night after all. Would you like one more with the band?” he asks, transforming the room into a party of joyous smiles as we move to celebrate everything Epicene. As Paul says, Madonna may have messed up the next song at this year’s Eurovision, but here we’re going to reignite the ultimate pop song that is Like a Prayer. And, as the choir of singers, donning their own Epicene merchandise, come flooding in from the audience, we can’t help but bounce along to the powerful performance.

From Dolly, and Madonna, to Whitney and Bjork, Paul waltzed through a timeline of divas that dominated his life, and lead him through many a hard time, with wonderful elegance. His band were incredibly refined, dancing through each new track with skill, precision and a great infectious joy.

And despite forgetting a couple of the words to Destiny’s Child’s Independent woman, Paul always had us completely hypnotized by his voice. Navigating through gender, soulful singing, and Enya’s nonsense verses, there was never a dull moment. And, with the substitution Bjork’s gibberish in Venus is a boy (Paul’s words) for “bangers and mash”, he had us laughing too.

Well, that’s it. Sorry to say, the show has ended. Feel free to transport yourself to the world of Epicene at any time though – it’s a great place.