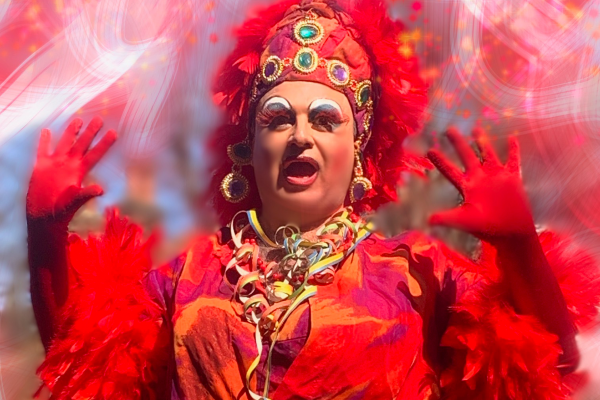 Tim McArthur is gearing up for a manically joyful December. The creator of Above The Stag Theatre’s inaugural cabaret season has a few other reasons to be joyful this coming festive season .

He’s not only curating a cabaret season at the Vauxhall venue, but also directing the annual panto at the iconic Royal Vauxhall Tavern, and creating a Christmas musical show for the Cockpit Theatre in London . Oh and did I mention a panto dame calendar ? Well that’s on the stocks too.

How did the all-round entertainer  that is Tim get to where he is ? Re-wind to the North East of Eng;and . “ Till I was 13 I wanted to be a bus driver, ” he tells me. But when his older brother started training to be an actor, his attitude changed.

His first amateur stage role was in 1987 in the musical Oliver: “ I choked on  Fagin’s sausage and my love of the theatre was born,’ he says. Aged 16 he went to Redcar Technical College and was due to appear as Judas  in Godspell when glandular fever struck him down. But nor for long – he graduated from Mountview Drama School  in 1995 and has worked constantly ever since – for which he says he is truly blessed.

His solo shows have played from the famous 54 Below in New York to seasons in Chicago – the city not the show ! And he’s both performed in and directed shows by the living legend Stephen Sondheim. He’s also directed a summer season of shows at the perfectly formed Jermyn Street Theatre and directed at the LGBTQ+ Above the Stag Theatre such shows as Maurice and My Beautiful Laundrette.

And he’s  had a radio career, hosting for 8 years the Curtain Up show on Resonance 104.4 FM, interviewing such stars as John Barrowman, Elaine Page, Ruby Wax and Sir Tim Rice.

Returning to his beloved Stag, he was busy staging its inaugural cabaret season when Covid hit and cancelled the series after just 3 weeks. But a new season is now slated from 4 December, featuring Conleth Kane, Shona White, Christopher Biggins and many more. Together with Duncan James , he will present Camp Night Out, which I guess speaks for itself.

Simultaneously  Tim is directing the annual panto at the iconic Royal Vauxhall Tavern – his 8th there. Pricked is based on the story of Sleeping Beauty and Covid precautions will  mean the audience will be given buzzers to replace the normal shouting out. “I’m looking forward to the carnage that night bring,” he says.

But for the first time in 10 years he won’t be playing Dame in panto or as he puts it “ wearing false tits  and a pair of lashes.” So instead of playing for Qdos at the White Rock Hastings , he’s decided to get his panto frocks out of the wardrobe and create a Dame calendar  with 12 quirky shots of his favoruite characters. As he put it:  “ if audiences can’t come to the Dame, let the Dame go to the audience.”

And it’s all for a good cause with some of the proceeds going to the Toy Project ,  which helps disadvantage children.

But Tim will be performing as he mounts A Perfect Christmas at both the Cockpit Theatre, Marylebone, and Above The Stag .

Tim describes the show as “something really warm and traditional – a musical celebrating the songs of Christmas “ It runs from December 7th -12 th and on 23rd and 24th , and on  17-20 December at Above the Stag  – details at www.cockpit.org.uk  and abovethestag.org.uk .

Musical direction is by the super talented Ben David Papworth , and it features among others Topsie Redfern.

And Tim’s up to yet more: for the past 18 months he’s been presenting a show on Men’s  Radio station about mental health within the entertainment industry . It’s called Healthy Acting and covers topics like addiction, depression and suicide. He says: ‘ the show is all about talking and sharing. Your journey may help someone else who is not in a good  place. “

Tim says lockdown 2 was harder than lockdown 1. “ It’s as  though someone has given us a bag of sweets in July and said now you can have them , but don’t eat the heart sweets . Save them and have them later in 2021. I feel a lot of people will be suffering  from the dark nights and the cold.”

“I hope that when it’s all over we can all celebrate our industry and get back to creating and telling stories once more. Humans need escapism . Artists need escapism. Theatre is escapism.”