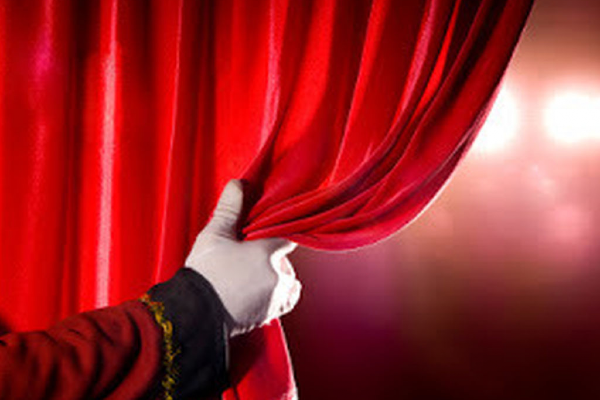 As we see bright Spring weather arrive , theatres prepare to open from May onwards – Hooray !

The National Theatre will open its doors in June for a new production of the Welsh classic Under Milk Wood , starring Michael Sheen and Sian Phillips. Shakespeare’s Globe will start  in late May with no-interval shows and some seats in the previously standing-only yard. Its season includes A Midsummer Night’s Dream, 12th Night and Romeo and Juliet, with Alfred Enoch and Rebekah Murrell.

The hilarious “ Dragatha Christie “ comedy Deathdrop, featuring the cream of RuPaul’s Drag  Race Show plus drag king LoUis CYffer, Myra Du Bois and Anna Philactic opens at the Garrick, London, from mid-May. The Drag Race itself will go on a UK tour next year. Pre-sale bookings can be made now.

The Barn Theatre, Cirencester, has a “one-shot” song cycle Now Or Never , which follows 7 people as they act defiantly on their last day on Earth. It’s streamed on 1 April. Comedian Joe Pasquale will tour in John Godber’s April In Paris from May.

The Lyric Hammersmith presents OutWest – 3 new plays by Tanika Gupta, Simon Stephens and Roy Williams from 18 June to 24 July. Musical & Juliet , a Shakespeare/pop music mashup  looks at what happened if Juliet didn’t die as in the original . It re-opens n September in the West End.

You Are Here is a new musical at Southwark Playhouse, set on the night of the 1969 Moon landing. It stars the wonderful Wendi Peters and runs from 17 May to 21 June , with 2 live-streamed performances on May 22. A 10th anniversary tour of the show Judy and Liza will star  its writer Emma Dears and Helen Sheals starting in Worcester in May and goes to Leeds among  other cities  and will have a London run.

A new online musical Cells, starring Clive Rowe will be broadcast in daily episodes from 19 April. The show was written for Clive and will have a showing of all episodes together on 26 April. It will be free on YouTube but donations will go to its partners  – Metta Theatre, the Royal and Derngate Northampton, Queen’s Theatre, Hornchurch and the Stephen Joseph Theatre, Scarborough.

The Soprano Behind The Screen is the story of Marni Nixon, billed as “ the star you nearly never saw “,  who voiced the songs of stars in films like My Fair Lady, the King and I and West Side Story. It will run at Chiswick Playhouse, written and reformed by Charlie-Jade Jones. Its brief run is 21/22 May and 16/17 June.

Shane Richie is Scaramouche Jones – a historic comic character , who travels the world at the age of 100.  The show’s  available on Stream.Theatre till 11 April.

The West End’s lights will blaze again with openings or re-openings of Les Mis The Concert, Pretty Woman, the musical, Lion King, Frozen, Back To The Future , Six, Everybody’s Talking About Jamie, Phantom Of The Opera and Lord Lloyd Webber’s new Cinderella. The Prince of Egypt and Jersey Boys also hit the stage.

Cruise – a celebration of life, queer culture and survival is an Aids-era show about a gay man under sentence  of death who miraculously survives. It runs  at the Duchess Theatre from 18 May to 13 June, starring Jack Holden. The innovative Barn Theatre, Cirencester, is staging two plays by War Horse creator Michael Morpugo. From 2-18 April An Elephant In The Garden will be streamed and from 19 April to 2 May Private Peaceful.

The top-class cabaret venue the Crazy Coqs at the Zedel off Piccadilly Circus has a huge season of shows to suit all tastes  from 17 May to June 30.  The season includes Joe Stilgoe and Friends, Downtown star Julian Ovenden in Can’t Help Singing, the Jay Rayner Quartet, An Evening With Alison Jiear, Marcel Lucont’s Cabaret Fantastique, the sensational  La Voix and Brighton-based Ty Jeffries’ alter-ego Miss Hope Springs.  The amazing Ute Lemper will air her show about Marlene Dietrich streamed  4-11 April. Incidentally Miss Hope Springs will also feature as part of the yet unannounced programme for Brighton Fringe – watch out for Scene’s preview of the Fringe soon.

Ian McKellen will be 82 when his age-blind Hamlet takes to the stage at the Theatre Royal Windsor and he will also tread the boards there in The Cherry Orchard, starting in June . Mark Farrelly seems to specialise in queer solo shows and he has three on tour from May  – his terrific show about queer icon Quentin Crisp , his show about comedian Frankie Howerd , and a show about writer Patrick Hamilton – The Silence Of Snow .  He tells me he’ll also have a new solo show about the great film maker Derek Jarman.Lots to look forward to in all these offerings .

This coming Sunday Sky Arts on Freeview will broadcast The National Theatre’s specially filmed  production of Romeo and Juliet, starring the Crown’s Prince Charles – Josh O’Connor. It airs again on 5 and 8  April

With Brighton Festival and the Fringe to look forward to in May, there’s plenty to keep us going. New York’s Mayor De Blasio has announced vaccination centres for theatre workers and pop-up test centres to get Broadway up and inning – by September if  not before.  In the West End The Government has  not yet announced what measures will be imposed  to get theatres open – presumably temperature checks, masks and social distancing to kick off , and maybe vaccine passports ? Scene will keep you posted as always. UK tours announced include: Priscilla, Hairspray and 9 to 5.

Looking much further ahead , but with a need to book now before it sells out, the Curve, Leicester will stage A Chorus Line throughout December.

Some worry that audiences won’t return quickly. Personally I can’t wait to sit in the stalls again.