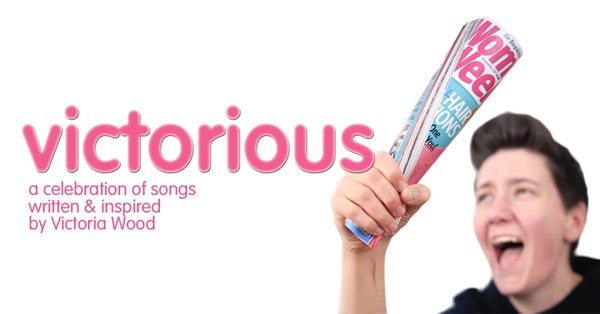 Following a huge demand for tickets an extra show has been added for Hannah Brackenbury’s Victoria Wood tribute show VICTORIOUS!, at the Brighton Fringe.

A MUSICAL tribute show to the late, great Victoria Wood has been rewarded for its success with an extra date at Brighton Fringe this month (May 24) after selling out the majority of its original dates within a week of opening.

Victorious, a one-woman show devised and performed by local musical comedian Hannah Brackenbury debuted at The Warren on May 8 and features a number of Victoria Wood’s classic comedy songs alongside poems and original numbers inspired by her work.

The extra date – Thursday, May 24 – has been added to the original 5-date run after huge demand for tickets saw the opening two shows sell out before the festival had even begun.

Hannah said: “I’m absolutely over the moon that the show is going so well and have been blown away by the feedback from audiences. Victoria Wood was a huge inspiration to me as a comedy songwriter and I’m always incredibly honoured when people compare my work to hers.

“I’ve been performing her songs as part of my comedy sets for many years, but after she died I wasn’t sure if it was the right thing to do to carry on using her material. Eventually I started getting requests to sing her songs again and the reactions were just so wonderful that I decided the time was right to put together a proper tribute show to celebrate her genius and to keep her music alive.”

She added: “The show includes a number of her well-known songs including the classic Ballad of Barry & Freda (Let’s Do It) which is the grand finale of the show. It has to be the final song because it’s absolutely exhausting and there’s no way I could follow it with anything else!”

♦♦♦♦♦ Sharp, on point, fabulous entertainment and a moving tribute to Victoria Wood. A thrilling and gripping show that touches the soul. Victoria would be honoured and proud.

♦♦♦♦♦ A lovely tribute to Victoria Wood. Good choice of songs, beautifully sung, and Hannah’s own material is funny and poignant too. An amusing, clever and moving show.

♦♦♦♦♦ A natural, unassuming and incredibly talented performer. Hannah channels the great Victoria Wood and impresses with her own material too.

♦♦♦♦♦ A fantastically brilliant, beautifully crafted show. A very respectful tribute and celebration of Victoria Wood’s work. Hannah Brackenbury is packed with talent and this is the perfect showcase for her to show it all off.

Tickets are now on sale for the extra date scheduled for Thursday 24th May 24 at The Warren at 9.45pm.