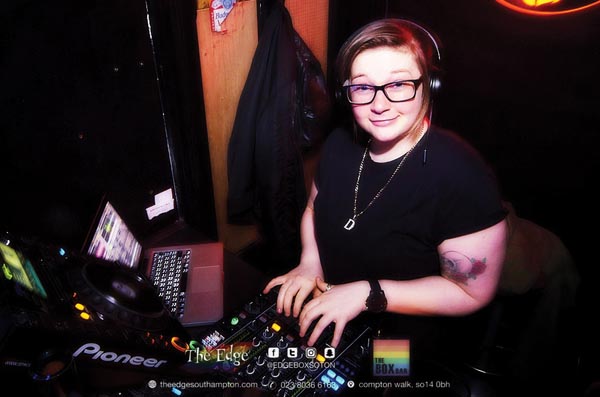 Well the merry month of May is upon us little spring chickens, so who better to spend a bit of glorious time with than the lovely Darcy Buckland, queen of the Revenge decks and a proud mover and bum shaker on the Southampton scene…

Where can we hear you? Every Thursday you can find me on Level One at Revenge for FOMO with chart, pop and r&b tunes! Then on Mondays I’m on my home turf at The Edge in Southampton and back to The Edge on Friday nights for Glow. Since Southampton Pride launched a couple of years ago I have been DJing on the mainstage, so I’m really excited that I’ll be back again this year!

What are you playing these days? I tend to generally play chart, pop and R&B in my sets though I have a secret love for deep/techno house… you won’t tell anyone will you QJ!? (Whoops, just did – QJ)

Any other projects going on? I’m currently in the middle of producing a few tracks of my own as we speak and I produce a monthly podcast called Bum Shakers which features tunes that are very, ahem, bum shaky! Plus Southampton Pride has a fundraising boat party event coming up on May 6 that I’ll be DJing at.

Fave song of all time? That’s always a hard question! Whenever I get asked this I give a different answer every time! So today’s choice is… ‘Pure Shores’ by All Saints. It’s got those good summer vibes to it!

Best ever gig? My favourite gig that I have ever done would 100% be Glastonbury festival in 2013! It was one of the first ever gigs I had ever done and it was a seven-hour set on one of the main stages with a few famous faces in the crowd. It was insane and scary all at once!

Dream gig? You know, I would love the chance to DJ on a lesbian cruise, proper L-Word style, I mean, that’s the real dream isn’t it?

Tune you wish you’d never played! One time I played the Cha Cha Slide and felt the entire building move with the crowd. It was terrifying. Never again.

Guilty pleasure? I have every Kanye West song ever made, I’m not even ashamed… I feel like I should be, but I’m not!

Describe yourself in three words… Courageous, fun-loving and chilled!