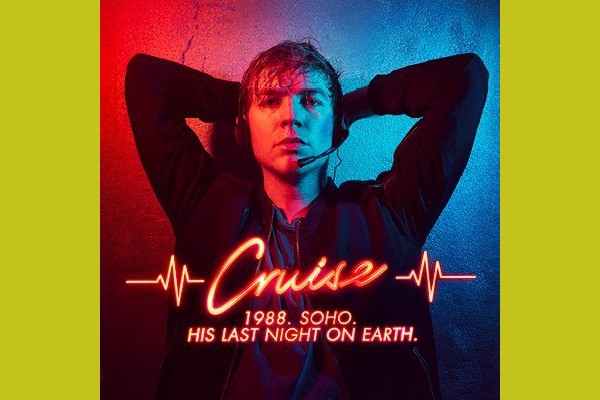 Cruise is a new musical drama  set in 1980s London at the height of the AIDS crisis that asks the question what happens when you are told you have four years left  to live and you don’t die?  Cruise could be just the ticket for those left wanting more after watching Russell T Davies It’s a Sin.  Written and performed by Jack Holden who starred in Warhorse, Cruise is a one- man show following the story of Michael Spencer. When Michael and his partner are diagnosed with HIV and given the four years news, Michael sells his house and is determined to go out with a bang. When he outlives the doctor’s diagnosis he has to rebuild a life he has already said goodbye to.

London. 1988. What should have been his final night.
Written and performed by @1JackHolden
Performing at the Duchess Theatre 18 May – 13 June
On sale now#CruiseThePlay pic.twitter.com/XfXqQZk5AE

“Cruise is based on a true story I was told while working at Switchboard. I was in a weird, unstable, self -destructive part of my early 20s. This story, among others, taught me my gay history, put my life  into perspective and helped me to grow up. The names and a lot of events have been changed and a hell of lot of material has been imagined” said Jack about Cruise which is directed by Bronagh Lagan and features an electronic score by John Elliot.

“This play is a tribute to a generation decimated by HIV and AIDS, a memorial for the old days of Soho a celebration of electronic music and an excuse to dance,” Jack added.

Cruise is scheduled to open at The Duchess Theatre in London on May 18 and runs till June 13. Streaming of the show will be available at Stream. Theatre from April 15-25.