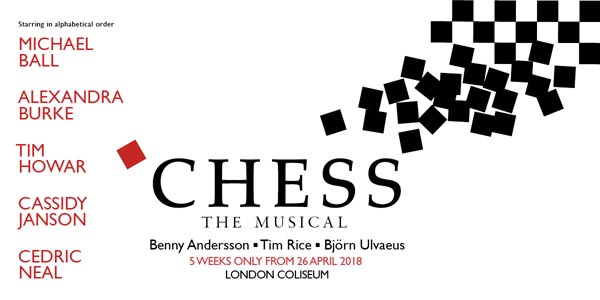 But Chess is back. Both on Broadway later this year following a successful run at the Kennedy Center Washington DC, and now after a West End pause of almost thirty years, at the home of the ENO.

This is the fourth spring production in collaboration with ENO by Michael Linnit and Michael Grade but like Sunset Boulevard before it, do not be fooled by any press releases describing this outing as ‘semi-staged’. In the hands of director Laurence Connor and choreographer Stephen Mear, it feels as anything but. This production of Chess is an event, but one with both a dynamic and emotional punch.

The story is as convoluted and concentration demanding as ever. Deep breath; Two chess masters both representing opposing superpowers at the height of the cold war come together on the world stage not once but twice and both have a romantic entanglement with the same woman, against a backdrop of political posturing, reappearing abandoned wife and child, threatening heavies, corporate sponsorship and the rise of mass media interest in such matters. Got it? In truth, with recent world events the story has never felt more relevant, and who knew that an American character written in 1984 and given the surname Trumper (I know) would come to represent so much.

But what captivates here is a score that soars. In Chess there is no ‘big song moment’ that we spend ninety minutes twiddling our thumbs waiting for, there are at least twelve and each as mighty as one another. But of course, with ABBA’s Benny Andersson and Bjorn Ulvaeus at the helm what would you expect. If ABBA really did abandon work on their tenth studio album in 1982, it would appear that most of the expected tunes have quite possibly ended up here.

Imagine a musical stuffed with the likes of SOS, The Winner Takes It All, Knowing Me Knowing You, Voulez Vous,  ok, ok not that one, but the individual songs and structure of the overall score here is magnificent. Let us not forget the lyrical influence of Sir Tim Rice through such highlights as Where I Want To Be, Nobody’s Side, Someone Else’s Story, Heaven Help My Heart, I Know Him So Well, The Soviet Machine and Anthem. Every one a corker.

Michael Ball who plays the Russian chess master Anatoly is a powerhouse and delivers a masterclass in singing every time he opens his mouth. His closing of Act One with the appropriately titled Anthem, is worth the extortionate ticket price alone, but it’s not all his show.

Tim Howar as Freddy Trumper and Cassidy Janson as the east-west torn love interest Florence Vassy are both magnificent, each commanding the stage during their multiple scene stealing epic moments. Janson’s Nobody’s Side lifting the roof off The Coliseum and many a middle-aged homosexual’s bottom off his seat.

However, revelation of the month goes to Alexandra Burke. I for one had thought quietly to myself “if she Hallelujah’s the hell outta this I’m leaving at the interval” but she delivers a performance as the abandoned wife and mother Svetlana threatened by the Russian state that is understated, wounded but quietly resolute. She makes Someone Else’s Story originally written in for the ill-fated Broadway production, entirely her own and delivers a three-minute masterclass in musical theatre perfection.

The English National Opera’s award-winning orchestra and chorus conducted by John Rigby are flawless and help cement this musical into one of the greats. Of course there will be coach-trips of pink sequined stetsons bemoaning on twitter that “it ain’t Mamma Mia” . No. And I would want to take nothing away from that particular show which has sold tickets by the warehouse load, but then so have Big Macs. If it’s fine dining you’re after, this is it.

Chess has a limited run at The Coliseum London, until June 2. This is the fourth production in collaboration with ENO by Michael Linnit and Michael Grade.