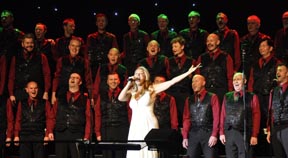 Brighton Gay Men’s Chorus (BGMC) pull another cracker out of the hat.

The event was raising funds for the Sussex Beacon who offer specialist care and support for men, women and families affected by HIV.

Both of their previous Christmas shows suffered from sound issues in the huge expanse of the Dome Concert Hall. Pull A Cracker 2013 solved those technical sound issues and gave the 1,500 devotees in the audience the best concert I have ever heard this talented choir deliver. Production was spot on. Sound was spot on and the programming was spot on.

Pull A Cracker 2013 had everything. Great singing, dancing, comedy and the fabulous Claire Sweeney who while bringing West End razzmatazz to the show pitched her performance and patter to complement the Brighton Gay Men’s Chorus rather than overshadow them and in doing so she established a wonderful repartee with the audience.

When producing such an event it is important to get the content balance right. Pull A Crack 2013 ticked all the boxes.

As with all BGMC concerts, members of the chorus were featured as soloists. Colin Rogers March sang Perhaps Love; Nic Collins sang The man with the child in his eyes; Rod Edmunds sang Giants in the Sky; Sadao Ueda sang I look to you; Stephen Tucker sang Has anyone seen my tiddler; Ant Pay’s interpretation of Kiss The Air a technically testing number for anyone to sing was truly memorable. Ant delivered a reflective, poignant performance and clearly connected with the lyrics of this song.

My secret pleasures during the evening were the choirs interpretation of Cantique de Jean Racine and the Coventry Carol which showed BGMC at it ‘choral’ best. It was wonderful ensemble singing from a great choral choir and the audience loved it.

State of Independence provided an impressive start to the second half of the concert. Beautifully controlled singing, building steadily to create a ‘wall of sound’ when the choir opened up. Over the years I have often commented that BGMC could benefit some times from letting go and vocally opening up. State of Independence gave them the ideal opportunity to do this and show themselves off at their very, very best. Their sound was huge and in the Dome acoustic it appeared as though there were hundreds of people singing rather than a choir of 70.

BGMC’s usual favourites were performed very ably including; Solitaire, Go West, It’s Raining Men and Enough is Enough. They are a tried and tested part of their repertoire.

Christmas cheer was provided by classics such as Last Christmas, Happy Xmas (War is over), I Wish It Could Be Christmas Every Day and the hilarious 12 Gays of Christmas.

Claire Sweeney performed a selection from Chicago, a show she starred in the West End playing Roxie Hart creating moments of pure showbiz along with four male dancers. In the second half she asked the audience to join her in singing White Christmas. She pressed all the buttons. The audience loved her as she brought her endearing scouse charm to the Dome. Something we need much more off in the future at the Dome.

BGMC benefit from having an experienced musical team around them.

BGMC like the other LGBT choirs in Brighton and Hove have become the backbone of the LGBT Community and collectively they bring a wide range of skills to the table. BGMC were instrumental in persuading all Brighton’s LGBT choirs to come together and sing on World Aids Day this year for a concert at St Mary’s Church which was the most inspiring LGBT event I have covered in 20 years of editing this magazine and gave me great personal pleasure.

There is a reason why BGMC won best community group at this years Golden Handbag Awards. They are more than just a great choir. They are also a great social network group who realise that their audience and supporters are the lifeblood of their organisation.

First and foremost they have a great communications strategy to make sure they communicate what they are doing to their audience. Secondly they bring a great deal of pleasure to many many people.

Brighton Gay Choirs have become the LGBT voluntary sector organisations of the present and future and the model BGMC work to should be embraced more widely as some of Brighton’s LGBT organisations struggle to find a reason to justify their continued existence in Gay Brighton in 2014.