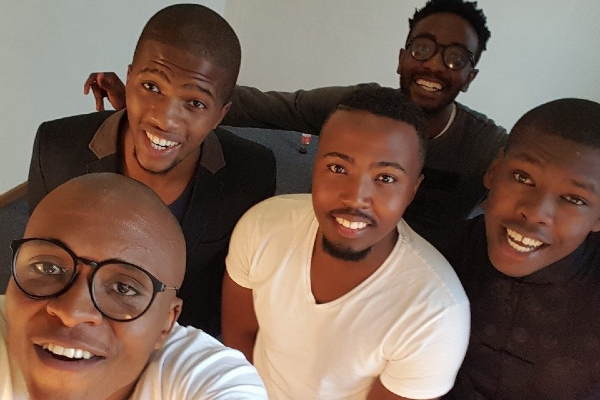 Signature Sound A Capella presents a short online concert that is delightful in its close harmonies coupled  with African rhythms.

Music In The Air was the only one of their offerings that I had heard before but none of the programme disappoints. Their sounds are beautifully balanced between the four male and two female voices and their choices often underline the debt they owe to the big names of South African jazz.

They give us Swingle Singers-like clever layered melodies , but at other times complex rhythms and tunes that bring out the rich variety of their voices. They tell us that isolation enforced by the pandemic  has hit performers hard, but they’re a joy to hear and it would be great to hear them in the flesh some day. You can still catch their concert on the Brighton Fringe website for another week.

FourTails Theatre Company  took  us back to the cabaret scene of Zurich in 1916 and the creation of the anti-art Dadaist movement.

Their Mayhem At The Cabaret Voltaire, by Timothy Coakley,  is very perplexing. For a start they tell us that we’re not much of an audience and they’re not sure they want to carry on with the show. When a belligerent audience member berates them for their lack of content, it’s quickly clear this is a “ plant “ and she is a cast member.

This mix of reality and illusion is disconcerting and clearly it’s meant to be. The unnamed cast have terrific acting skills , in voice and movement but at times  it was like watching an acting class for drama students. They certainly tell us a lot about the short lifespan of the Dadaists and set it in some sort of context as partially an outcry at the madness of the World War they found  themselves in the middle of.

The audience at the Rialto Theatre warmed to them and they are loveable in their anarchy but in the end – as one of their critics onstage puts it “ is  it really art ? “.