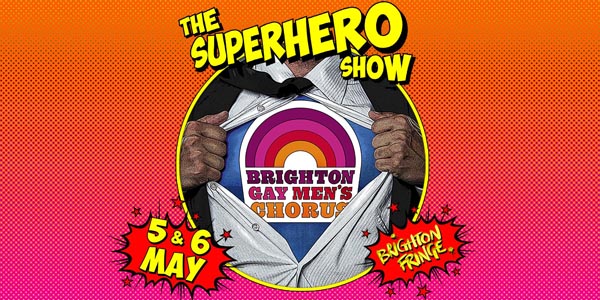 Brighton Gay Men’s Chorus (BrightonGMC) will be performing twice on the opening weekend of the Brighton Fringe (May 5 & 6).

The Superhero Show will be an explosion of energy, colour and harmonies with a clear mission: to entertain and inspire.

Musical Director Marc Yarrow and his team, have chosen an array of new songs to represent and celebrate the musical and other superheroes in our lives. The rousing choral arrangements, many of them exclusively commissioned for the Chorus, promise a rich and distinctive musical experience – of a kind that male choirs deliver so powerfully.

The writing and production teams, with creative director Quintin Young, have a real treat in store for you. They don’t want to give anything away, or spoil the surprise, but let’s just say that local fabric stores have run out of spandex and lycra…

The Superhero Show draws inspiration from the comic book, Love Is Love, published in response to last year’s Pulse nightclub tragedy in Orlando.

The 144-page anthology features one and two-page comic strips by hundreds of famous contributors, including stories about iconic heroes such as Superman, Spiderman, Batman, X-men and many more.

After the tragic news of the terror attack targeting LGBT+ people of colour, the Chorus sent a video message of support including a performance of their arrangement of Albert Hammond’s and John Bettis’s One Moment In Time. It is only fitting that the song will find its place in this show, dedicated as it is to Superheroes.

With each production BrightonGMC chooses a charity to support. The Superhero Show is no exception. They will help raise funds in support of The Sussex Beacon, Brighton’s own ‘superhero’ charity, which is currently facing the prospect of having to close some of its services.

Love Is Love is available in most bookstores and online with all proceeds going to Equality Florida, for the people most impacted by the Pulse shooting.