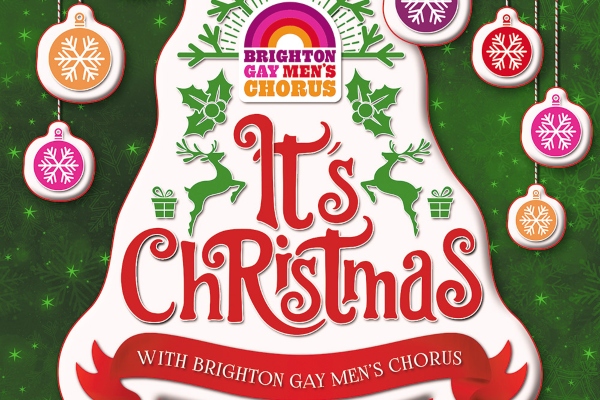 Tonight’s sold out Brighton Gay Mens Chorus concert was dedicated to James Ledward and his family in order to support the Ledward Fund, which is ring fenced within the Brighton Rainbow Fund and available for local homeless charities to draw on, acknowledging that 1/3rd of homeless people in Brighton and Hove identify as LGBTQ+,  a situation that James cared about greatly.
We have many fine choirs in Brighton and Hove and we should never compare them as they are all unique and important in their own way but it is safe to say that, for me,  BGMC are the Daddy of them all. Not just for their numbers but for their constant growth and innovation which, in turn, encourages the other choirs to experiment and move forward also.
This evening was a wonderfully non- Christmas ‘It’s Christmas’ show. A quite dark first half, full of thought provoking rich harmonies and constant unexpected dynamics with Act 2 pushing the boundaries up a notch and finishing it off with slick, camp, well loved moves  in the encore.
It seems unfair to praise anyone individually so, although each member of the audience will have their own list, I shall just name a few of my own personal ones from this evenings performance. Here they are:

Using the pulpit for the speeches was fine although the sound monitors  attached to the column in front of it obstructing some sight lines however, we heard everything beautifully. For the first time ever in 10 years, I found the Track intrusive now the harmonies and tonal qualities are so high so consider working with keys or live band only!

To finish off, with the help of the sensitive accompaniment of music director Tim Niall, all praise should go to Joe Paxton a truly talented and humble young Chorus director.
Not one word was spoken, never did he take applause or stand in a spot light until the very end, truly dedicated to his chorus.
Reviewed by Carole Todd for Gscene