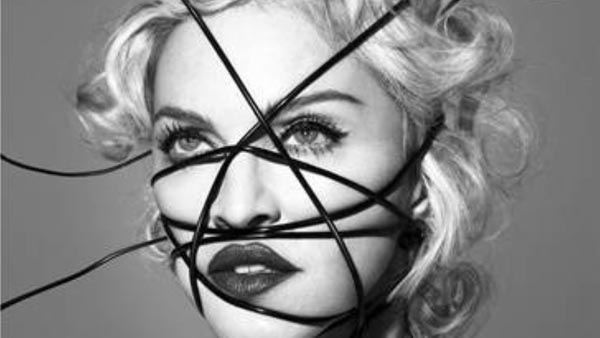 THE arrival of a new Madonna album still excites editors in charge of column inches even if commercial success is a fraction of the heady days of True Blue and Like A Virgin.

The preamble to this latest offering is unlikely to have been what Team Madonna had planned; 20+ leaked demos from a hacked computer account in Tel Aviv, and a potentially catastrophic yank off a podium at The Brit Awards, but judging from the hastily assembled and predictable headlines the morning after, Madonna is still considered (digital) printing press gold.

This is an album which in CD format alone is released in three distinct versions, standard, deluxe and super-deluxe but judging by the automatic digital track-listing made available in late December it appears the deluxe version is the expected acquisition and that’s the listing we’re examining here.

This is an album in two halves and whilst its production styles may divide critics and fans alike in equal measure, if there is any hype – believe it. This is as relevant a collection as any released this year and without hesitation defines why Madonna was crowned Queen of Pop and continues to raise an eyebrow over a diverse set of recordings which are as challenging, enlightening and uncomfortable as they are inspiring.

Despite an inordinate number of guest producers which has plagued both Minogue and Madonna’s more recent releases, the central powerhouse here is the Grande Madame Ciccone herself.

Much has been said about the pre-releases issued in advance of the final offering and by 9 tracks in and the slightly awkward Iconic you’d be forgiven for thinking you know where all this is going, but HeartBreakCity changes that in production, lyric and performance, our lady Madonna reeling from the lovers first name-checked in Drowned World who are only in it for the fame and fortune coat-tail ride.

Body Shop and its motor vehicle metaphors should have been a disaster and it’s a wonder that as an idea it ever made it into the studio, Natalie Cole having recorded something similar almost 30 years ago (Jump Start My Heart), but a Madonna track has never sounded so vocally innovative and decisive. Similarly Holy Water should induce a slightly embarrassed wince “Bless yourself and genuflect, Jesus loves my pussy best” not to mention a sampling of Vogue, but imbibed with a Madonna wry smile pop music doesn’t get much smarter than this.

Madonna doesn’t take herself anywhere near as seriously as her detractors would have us believe but when she does the effect is epic. Inside Out seduces with a debilitating take off your mask…you’re beautiful when you’re broken down, and both Wash All Over Me and Messiah are loaded with bleak sadness Madonna first exposed us to on Oh Father and The Power of Goodbye, Madonna does sadness better than anyone and Wash haunts with its stark refrain: who am I to decide what should be done? If this is the end then let it come. Just when you’re convinced we’re closing with a trilogy of weepers the title track (which ends the collection here) racks up the tempo with an introduction you’d be forgiven thinking stowed away in a bunk from Tracy Chapman’s first album and a lyric to match: I barely made it out alive, but through the darkness somehow I survived.

Rebel Heart as a song in little over three minutes bites with a spot on analysis of everything we have ever loved or hated about our superstar Hell Yeah, this is me and I’m right where I’m supposed to be.

That is because Bitch, you’re Madonna, and along with Like A Prayer and Ray of Light this album should be in everyone’s collection. Buy it.