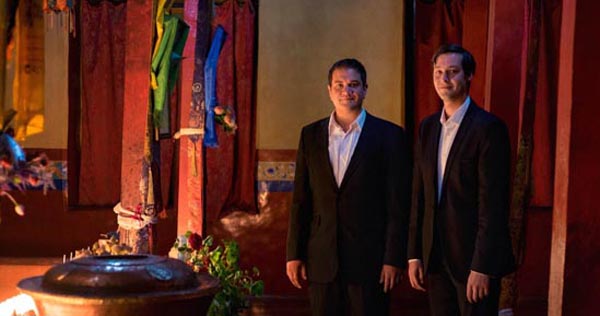 Coady Green, Artistic Director for Actually Gay Men’s Chorus and his partner Christopher Wayne Smith, both internationally award-winning classical pianists have made the record books by performing two massive symphonies for piano duet, 3600 meters above sea level at the Thikse Monastery, the biggest monastery in the Himalayas. It’s on record as the highest ever publicly attended classical music concert in history.

This most unusual concert came about to honour of the 100th year anniversary of the great Russian composer Alexander Scriabin’s death, Coady and Christopher were asked to help realise the composer’s dream of having his music performed in the Himalayas. Scriabin had grandiose plans for a seven-day spectacle of his music in this exotic location, combining piano, orchestral and choral music with light, colour, dance and scent.

They performed together at the event with a massive light show according to Scriabin’s own colour-tonal scheme, scent infusions from renowned French perfumer Michel Roudnitska, and dance movements from the monks of Thikse Monastery.

Christopher said: “It’s an epic project, several years in the making but it’s a job we love doing and though it takes a lot of very dedicated work, it does mean that we get to see some wonderfully unusual places around the world.”

The couple can next be seen performing together at the Brighton Dome on January 10 with the London Gay Symphony Orchestra and Actually Gay Men’s Chorus, in a fun and diverse programme which includes Carnival of the Animals, narrated by Miss Jason, highlights from HMS Pinafore and the show-stopping Poulenc Concerto for Two Pianos and Orchestra.