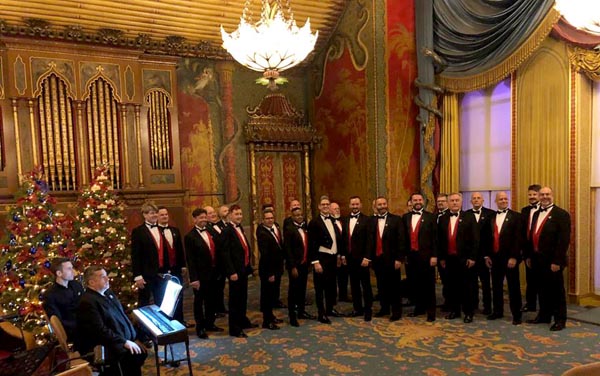 Actually Gay Men’s Chorus, sing at the Royal Pavilion to raise money for the Mayor’s charities, Martlets, Rockinghorse, Off the Fence and The Grace Eyre Foundation.

CHRISTMAS is always a busy time for Actually Gay Men’s Chorus, and December 2018 was no exception!

Following the privilege of being asked to sing for the switch on of Brighton’s Christmas lights, Actually Gay Men’s Chorus were thrilled to receive a request from Councillor Dee Simpson, Mayor of Brighton & Hove, to perform exclusively at her Christmas Concert in the opulent splendour of The Music Room of The Royal Pavilion.

To a packed audience, Actually GMC performed an intimate preview of their Christmas concert, It’s Actually Christmas. The concert raised £2,400 for The Mayor’s Charities, which include Martlets Hospice Care, Rockinghorse Children’s Charity, Off the Fence and The Grace Eyre Foundation.

Musical Director, Samuel Cousins, said; “It was a true honour to have been invited to perform by the Mayor in support of her chosen charities and to sing in the beautiful music room in the Royal Pavilion was an absolute pleasure. Supporting the local community in Brighton and Hove is what we are all about, and this event truly was one of the highlights for us in 2018.”

Cllr Simson recently invited the boys to a reception at the Mayor’s parlour, to acknowledge Actually Gay Men’s Chorus’ work for charity and its contribution to the city of Brighton and Hove.

Actually Chairman, Alan Baser, said; “We are a community organisation that finds fulfilment in performing together and to be able to share that with others is a real pleasure. We’re very grateful to Dee for her support of our chorus and being invited to join her in the parlour was a real pleasure and an indication that the City of Brighton & Hove values its LGBT+ community.”