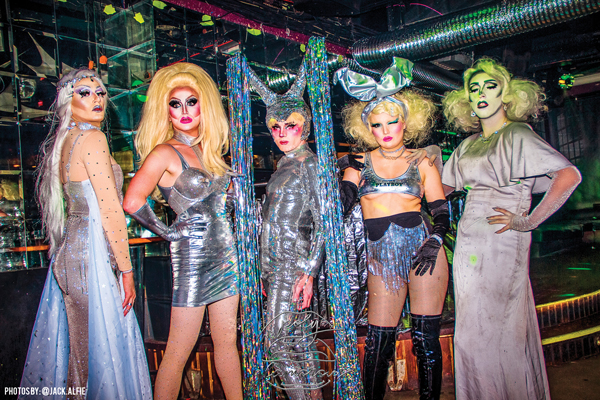 Graham Robson catches up with the gorgeous people behind Polyglamorous, the queer dance party!

For the initiated, what’s Polyglamorous?
We have fun music; it’s space for people to express themselves and dance. Each month we’ve had a different colour theme where you get discounted entry if you wear the colour!

Who is Polyglamorous?
Drag performers, DJs, photographers, video makers, makeup artists and creative types. What really makes Polyglamorous is the gorgeous people who come each month and party!

Where did it all start?
As a team of creatives working in nightlife in one way or another, we were a group of friends who found ourselves all dressed up with nowhere to go, so we decided to throw our own party. Our first night was on a cold Sunday evening in November in a small venue in an archway on the seafront and 74 people came, all wearing red and the night was made! Looking around the room, seeing everyone dancing to great music wearing red in a red lit room, it was incredible! There was a mood that we’d never seen before. People talked to each other, brought together by wearing the same colour, dancing to the music and taking photos of their outfits and then connecting afterwards on social media through our Instagram photos. It was like a secret ‘members only’ club but everyone was invited!

And inclusivity is at the core of the night…
Our venue is fully accessible with two areas, one big dance floor, and a quieter area for those who want to sit down and chill out. There’s no dress code, no guestlist, no VIP area.  We have all sorts of people turning up, all different ages and backgrounds and there’s no attitude. Everyone comes because they want to have a good time!

What’s your view on Brighton’s queer scene?
There’s a great queer scene in Brighton, and something for everyone. There’s drag every night of the week, events like Gal Pals, Queer Prom and Traumfrau, queer stand-up comedy nights, queer open mic nights, loads of amazing queer theatre at the Marlborough and Brighton Fringe, plus we have the best Pride in the UK!

Congrats on winning two Golden Handbag Awards, how did you celebrate?
It was amazing. We’d only been running for about six months when we were nominated so it was great to be recognised as Brighton’s best clubnight and event for trans and non-binary people. The Golden Handbags itself was stunning. Everyone was dressed in their best and we were treated to performances from some of the legends of the cabaret scene. It’s so nice to get everyone that works hard within the LGBTQAI+ community in one room and see just what we can all achieve and give to the community when we try. There was a huge focus on charity, either fundraising or important projects and groups. It inspired us to start raising money for local organisations that help queer people. Our recent Pride event raised over £700 for MindOut!

Any top tips for newbies?
Arrive early to avoid the queue and get your photo taken by our in-house photographer. Come in a group or come alone, you’ll soon make friends. Don’t know what to wear? Who cares! Polyglamorous is about expressing yourself! There’s plenty of pictures and videos on our Instagram @polyglamorousbrighton if you need some inspiration, and you can also pop down to Beyond Retro where you can get 15% off any item of clothing from the assigned colour rail, provided you’re coming, of course! Oh, and don’t forget to bring cash for the door, and most importantly HAVE FUN!

What’s next?
We’ve moved to Chalk in Pool Valley, previously known as The Haunt. The new club is purpose built with some of the best lighting and sound in Brighton, as well as a huge stage!

For more info, follow Polyglamorous on all the usual social media platforms!