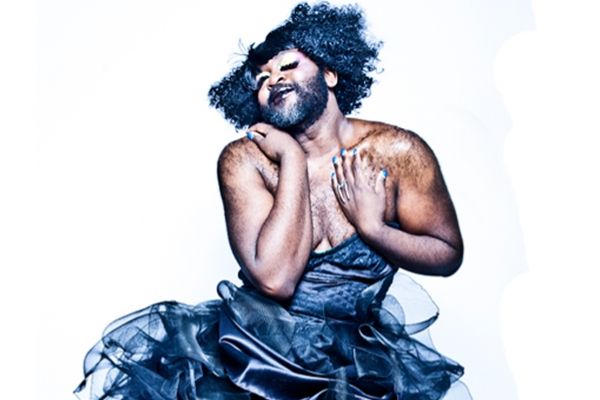 Le Gateau Chocolat is one of the UK’s leading drag performers. He’s also an opera singer. Naturally, he doesn’t lip sync for his life. His musical numbers are very much live.

His latest show is his most ambitious yet. Each night, a specially curated operatic song cycle will offer a meditation on where do we go and who do we become when we lose our anchor? LIMINAL is currently on at The King’s Head Theatre.

The cast members include British-Iranian soprano Honey Rouhani. Dan D’Souza made his debut in 2019 at the Paris Philharmonie and the Sala Santa Cecilia singing High Priest in Handel Semele. Italo-Australian tenor Robert Barbaro vocally trained with acclaimed soprano Mirella Freni and has performed around the world. Grace Nyandoro has played Aksinya in Lady Macbeth of Mtsensk (Birmingham Opera Company) which won The Royal Philharmonic Society award (2019). CN Lester is a multi-genre musician, author of the critically-acclaimed book Trans Like Me, and curator of arts night Transpose, now entering its fourth edition at the Barbican.

The show brings classic characters from opera into the present day. What would Tosca be up to if she was around today? How about Madame Butterfly? We caught up with Le Gateau in between rehearsals to find out more.

Tell us about your inspiration for the show. “Opera singers usually have no invitation to be themselves. We are always in a role that’s existed for hundreds of years. Sure you can sing opera but who are you when you’re not singing those characters? It’s interesting to find out. After you’ve performed Queen of the Night, when you take the costume off, who are you and can the audience ever find out?”

Le Gateau Chocolat sings live in a deep, operatic voice. Did he have classical training? “I studied law but I had an ability to sing. I continued singing as and when I could at Sussex Musical Theatre Society (SMuTS). I did amateur theatre in Brighton too. That’s how I kept the music alive. After my law degree I was able to work at the Royal Opera House and the Young Vic. Mine is an unusual path to singing opera.”

It paid off though. “I’m thankful I don’t have to be a lawyer and I can do this instead. It’s given me all these opportunities. I originally did LIMINAL at Brighton Festival. It’s the most robust piece of work I’ve made. I wondered what it would be like for opera singers to interpret the piece. It’s their first time playing themselves on stage and my first time as a director.”

What’s your connection with King’s Head Theatre? “It’s my first production there. Heather Ruck is the interim producer. I’ve known her for about eight years. She has tracked my career since I started making shows. Our relationship has stayed quite dynamic. The in-road to the Kings Head was Heather. They are interested in opera. She asked how I’d feel about doing something operatic that explored the conversation we’re having internationally.”

“The show explores isolation, BLM, feminism, domestic violence and mental health. Heather invited me to be more robust in proposing the answers to these questions.”

“How do we employ this art form to tell our story? How do we do that? You may see those classic opera roles around the world, but how do we make the songs unique for the audience? So when people leave having seen the performance it’s not just beautiful music. You’ve gotten to see who these people are. To become an opera singer requires years of dedication and training. This show is about exercising agency and inserting the performers’ own stories into it.”

Can we expect a mix of comedy and drama from the show? “Comedy, satire, drama… it’s all those things. The reality of who we are as humans is so varied. We aren’t just funny or sad or dramatic. We can cycle through all those things, as we have over the last eighteen months. It’s a commentary on what it means to be a human being. It’s always anchored in the reality, the truth of the person, what they’ve been through. That’s how I’ve engaged with all four opera singers. I hope when audiences leave and they hear Madame Butterfly and The Sound of Music, they also hear who is singing behind them.”