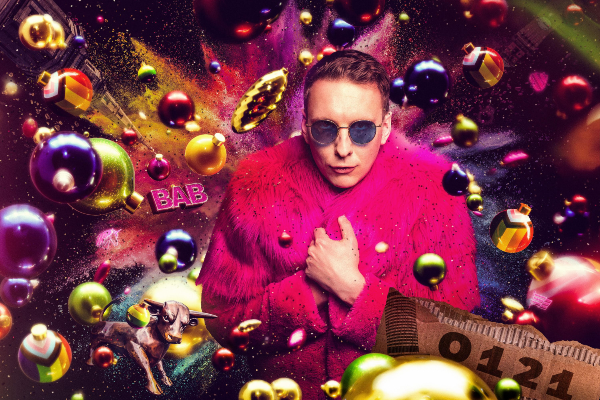 Comedian Joe Lycett is hosting a queer, Christmas house party live from his hometown of Birmingham for Channel 4 this festive season. In an interview with Scene Magazine, Lycett spilled the tea (or mulled wine) on the show’s details and how the idea came about.

“I’ve always wanted to do a mad live show and ideally in Birmingham,” Joe Lycett explains, “and then the queer element of it was sort of a bit of a brainwave from this producer, Jake Graham, who tweeted many months ago saying that he would love to work on a show that’s a big celebration of queer culture and I was like ‘yes that is the thing’.”

“The immediate response to that was from Rosie Jones and she said ‘I’ll host it’ and I was like, ‘I’m not letting that b*tch have it,” Joe joked, “so I swooped on in and pitched to Channel 4 ‘Mummy’s Big Christmas Do’ essentially and just said, these are the elements that I think are important about it and I think it’s important it should come outside of London. A lot of queer culture outside London is really interesting and important and we should be championing that. And I think it should be live because that’s exciting and naughty and dangerous, and I think we should be championing voices across the spectrum, and to Channel 4’s credit, they’ve been very positive throughout the whole thing.

“Representation is really important. In real life, it’s important to meet people from different cultures and different sexualities and genders and backgrounds but also to have them on-screen to just go like ‘oh yeah they look a bit different to what I look like but they seem to be very similar. You know they eat and they enjoy similar things to me and they watch the Bake Off… they are very similar, just slightly different in a few tiny ways and it’s not relevant, it’s doesn’t really matter’. And I think that’s where representation is really important because it gradually pushes that needle further into them going ‘oh it would be bad if the rights of those people were reduced ‘cos I like that one that I’ve seen on that telly show’, and I think that helps in a small way. There are other things we have to do but that helps.

“It’s a bold move for them [Channel 4] to commission something like this, but you know it’s a testament to them that that’s what they’ve done and I think you’d struggle to get it on any other channel actually because this is what I was watching on Channel 4 when I was growing up. You know the early Graham Norton shows felt very dangerous and naughty and that was all Channel 4 and so many others; Eurotrash (which had its issues) but you know that was dangerous and naughty in other ways, TFI Friday, and the Big Breakfast. Channel 4 was my kind of television home when I was a kid, growing up and it’s a great honour to be part of the team there now.”

Mummy’s Big Christmas Do airs Wednesday, December 22 at 10 pm on Channel 4. Joe Lycett also spoke to Scene further about his queer experience in Birmingham and beyond, so look out for more in January’s issue of Scene Magazine.