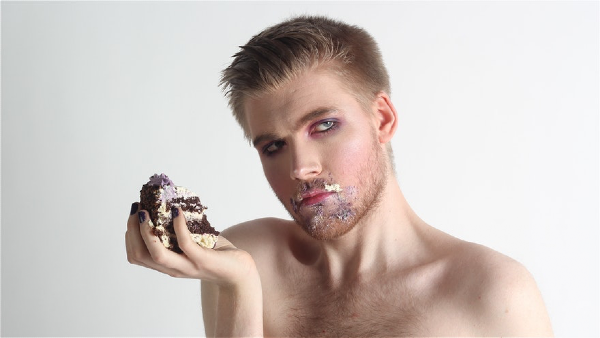 In sharp purple suit with frilly cuffs, Brighton Fringe comedian Eliott Simpson tells us right off : “let’s get one thing straight: I’m not”. And Eliott is of course an anagram for toilet, so prepare for lots of excruciating dick jokes in this quick fire hour, with more one-liners than he or we can count.

Oh and he’s also autistic, which accounts for some of the frenzy in his non-stop performance. But Eliott has a serious mission- to educate us abut the nature of ascxuality – both what it is and what it isn’t, and to maybe make the world more tolerant to this group which he says are too small to be a recognised minority.

Asexuality, he asserts, is like being Gay, but not as fashionable, going on to add: “an asexual comic is a gap in the market but not one you can fill”.  His bedroom fantasy is getting 8 hours of sleep, and he also points out that if we don’t laugh at his autism, it’s a hate crime. And it’s a hate crime if we do laugh.

And he points out that you can’t really come out as asexual, pondering whether asexuality – the lack of interest in sexual activity – is proper sexuality at all. “It’s not a low sex drive- it’s just that I don’t care,” he tells us. But he adds that globally 78 million identify with it – making them truly the 1 per cent.

But it’s within the safety net of sarcasm that Eliott’s show works best: “pornography gives you an unhealthy expectation of how quickly a plumber will come to your house”, he says. And he wonders if the name of the nature should be changed to “ shagnostic”

But in the end he gives us – appropriately – a serious anti-climax: “ we are a real community. We are real people and we don’t need to be fixed”.

Eliott’s show had a very short run at the Walrus in Ship Street.