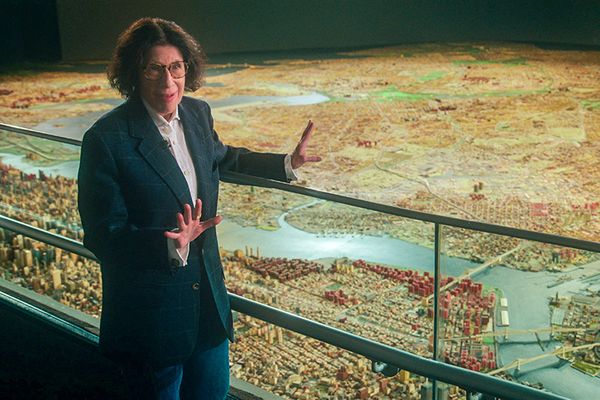 Fran Lebowitz is one of the great New Yorkers. She moved to the Big Apple from New Jersey in the early seventies and she’s been there ever since. She insists that it’s the only place she could live. In her latest series with Martin Scorsese, he asks her what New York has that other places don’t. “Everything,” replies Lebowitz.

She came to prominence via Andy Warhol. His magazine, Interview, had a fairly small readership but it was very influential. All the wannabes and big shots in New York read it. Fran Lebowitz became Interview’s most celebrated columnist. This led to her publishing two bestselling books of essays. By the late seventies she was appearing on every American chat show, delighting and unnerving audiences with her caustic wit. Her turn of phrase is so sharp she’s been compared to Oscar Wilde and Dorothy Parker.

Becoming a literary star early in life had its drawbacks. Lebowitz experienced writer’s block on such a severe scale she called it “writer’s blockade.” The pressure of living up to her image proved to be a bit too much, on the page at least. In person it was another story.

She refashioned herself as a full time wit and humorist. In the spirit of Quentin Crisp, she entered “The business of being.” She’s been invited to all the coolest functions ever since. A female dandy and bon vivant, always ready with a sardonic remark or putdown. She has truly mastered the art of conversation.

Martin Scorsese met her at a party and they became friends. She’s kind of like a character from one of his films. A street smart, very American type with a gift of the gab and a somewhat fatalistic worldview. He made a documentary about her in 2010 fittingly titled Public Speaking. The success of the film led to their latest venture, a seven episode Netflix feature called Pretend It’s a City.

It’s a fascinating portrait of New York and one of the city’s most recognisable inhabitants. Pretend It’s a City is centred around a series of conversations and live events with Fran Lebowitz. She talks about her pet peeves (which are legion) and her love of her adopted city. Scorsese can be seen on camera for much of the series, laughing uncontrollably as Fran puts the world to rights.

Although Fran Lebowitz is gay, she has kept her personal life private. She never discusses her relationships. She does discuss everything else though. She tells Scorsese that nothing is better for a city than a dense population of angry homosexuals. She moved to New York in the early seventies because there wasn’t really anywhere else for gay people to go. The incredible arts scene and nightlife of New York was disproportionately influenced by gay people: from Studio 54 to Andy Warhol himself.

Today, New York has become safer, cleaner and more suburbanised. She says that young people approach her and tell her they wish they could have lived in New York in the seventies, whereas she never approached anyone in New York in the seventies to tell them she wished she’d been there in the thirties. Lebowitz embodies the spirit of the bohemian, arty New York many people still hold dear. It was an edgier New York. Some would say a more exciting New York – less dominated by big money. As long as she’s still around the bohemian spirit of New York will live on.

Fran Lebowitz has seen it all and she shares her wisdom with you in Pretend It’s a City. It makes for great lockdown viewing. She would be the ultimate dinner party guest.

Pretend It’s A City is available to stream now on Netflix.