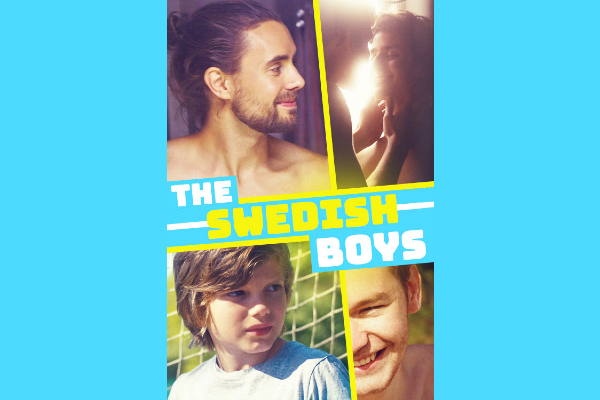 Coming Out tells an all-too-familiar story of young Joel who wants to come out to his parents – “maybe I’ll feel better. It’s still me “, he tells himself and us – but will he?

Polly is a touching attractively  filmed triangular love story. Polly visits her ex boyfriend Jacob who is now living with his boyfriend Nicholas – expect the unexpected when chemistry is created among these beautiful people.

Filip is  a  7-year-old boy devoted to his older brother Sebastian, but when he sees a secret kiss, he’s not sure how to react.

No Brakes : Johan and Anton are clearly attracted, though one is more shy than the other. When they team up with Julie, a bike ride leads to an outdoor party and time for true feelings to be expressed – after lots  of knowing slow Scandinavian glances of course !

The Memory Of You is another well-trodden path of a gay romance. Filmed in one take in a quiet  Stockholm side street, we meet Adam entering a restaurant with his wife. By chance he sees an art exhibition opening across the street in an art gallery and a surreptitious visit leads him back to memories of an unfulfilled  romance with artist Erik – and  feelings about what might have been, but never was,  get re-kindled.

Perhaps the most moving of the shorts is Distances. Eva pays a short return visit from her homeland to see her deaf son David. The distances of the title are not  only geographical but physical because of his deafness and emotional when Eva meets David’s boyfriend Simon. It’s a story that could be developed further but well-formed in this short version.

Finally, Stockholm Daybreak covers another recognisable queer situation. How do you tell your friend your true feelings about him, and how will he react ?. It’s beautifully framed by the city’s breaking dawn.

The Swedish Boys are available on various platforms – more information at nqvmedia.com