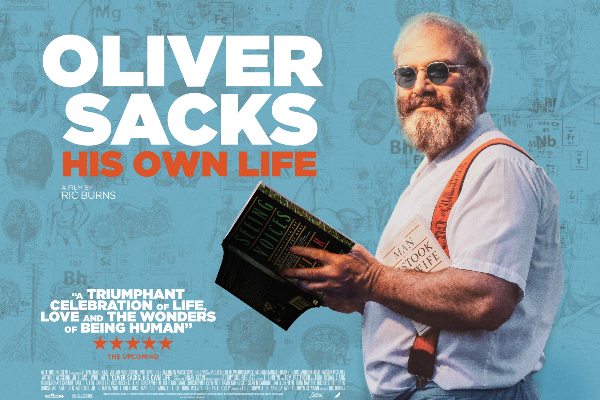 All good stories are a journey and what a journey director Ric Burns takes us on to let Queer neuroscientist Oliver Sacks tell us his story, filmed a few months before his death from cancer.

Oliver talks direct to the camera and the film is interspersed with archive footage and with tributes from a range of scientists and authors , including the late Jonathan Miller, who was a school friend.

It strikes me that one of Sacks’ great qualities was being an outsider. A middle-class Jewish boy growing up in Kilburn, London,  with two distinguished parents who were both doctors, he was clearly destined to be a medic too. But when he comes out to his father and urges him not to tell his mother, the father takes no notice and his mother’s reaction is direct and dreadful. She tells him he is an abomination and she wishes he hadn’t been born.

This pushes the young Oliver in on himself, an introversion accentuated by his wish to isolate himself from his brother who had been diagnosed as a schizophrenic. And strangely this introversion might go to explain his career-long interest  in what is going on inside the heads of the most disturbed patients – many in vegetative states. His career, first in California and then New York led him to be a trail-blazer in the use of L-Dopa, a drug which in many recipients awakened their dormant statuesque states – but with dire side-effects.

What’s great about his life and equally about this film is that it blends science and literature. Towards the end he tells us” I’m not easily categorised -am I a writer or a doctor?” The truth is that he is both and his massive contribution to his medical discipline is his story-telling. By accurate observation, he is able to give these people a new life – their inner life.

Largely shunned by his colleagues, it is only when Hollywood re-created his pioneering book Awakenings with Robert De Niro and Robin Williams that he started to get the universal recognition he so clearly deserved. His other skill is to speak in popular language and with huge heart. His story The Man Who Mistook His Wife For A Hat was a world-wide best seller.

The stimulus for telling his story to camera was a diagnosis of incurable liver cancer, and it’s great to see that after 35 years of celibacy, in his late 70’s he finds the love of his life Billy. With his friends, colleagues and Billy in the room he poignantly tells us: “ I see tears all round me but I’ve yet to shed them myself”.

The journey from the drug-taking,  muscle-bound, leather-clad biker of his youth to the sage author of millions of words is a truly remarkable one. As he himself sums it up: “when people die they cannot be replaced”.

You can catch the film at Brighton Odeon and Cineworld in Brighton Marina for one day only -Wednesday 29 September.