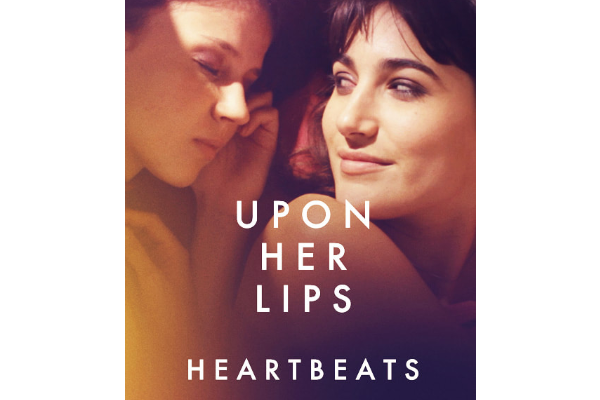 Upon Her Lips : Heartbeats  is an intriguing collection of Lesbian love stories with  lots to surprise and interest its audience.

In After His Death, Ayelet and her girlfriend are at Ayelet’s  father’s funeral , where a chance discovery of photos leads to her finding her father’s secret male lover. The tension grows as her mother refuses to acknowledge the truth and Ayelet  finds a surprising ally .

In Control we meet two women making hard work of their relationship and unsure what each wants.

Honeymoon is a tender romance with a twist. Two partners – Lucy and Johanna are on their honeymoon – one profoundly deaf and the other partially so . When they   unearth prejudice in a third party it also surfaces  in their own fragile relationship.

In Narciso,  the barrier to a proper relationship seems to be language. As two women prepare food in a kitchen, one is teaching the other her language of Danish  , but the twist is she is clearly teaching her wrong meanings – which comes to a head with an incident in their local supermarket. Not sure where this film thinks it’s going !

In Molt, we meet two girls – Sarah and 12-year-old Cadie – coming to terms with their sexuality, and the rituals of puberty. Tenderly  and hauntingly told .

Forbidden Fruit is perhaps the trickiest subject matter of the collection . A mother’s affection for her 15-year-old daughter entering puberty seems domineering and unhealthy. An unnerving if beautifully filmed storyline.

For me the most engaging of the films is  the strangely-spelt Bootwmn,   a documentary about Deana McGuffin – a third-generation boot maker in Wichita Falls, who makes no secret of her Lesbianism nor of the unease she engenders in the rough tough male cowboy bootmakers she competes with in a contest. She’s a marvellous human being and I could have watched an hour of her.

Buddhi, Buddha  shows us a young woman back from a spiritual journey to Nepal , who through practising meditation finds a beautifully depicted tactile loving relationship with her long-time female friend.

For more information,  go to nqvmedia. The film is on Amazon and Vimeo