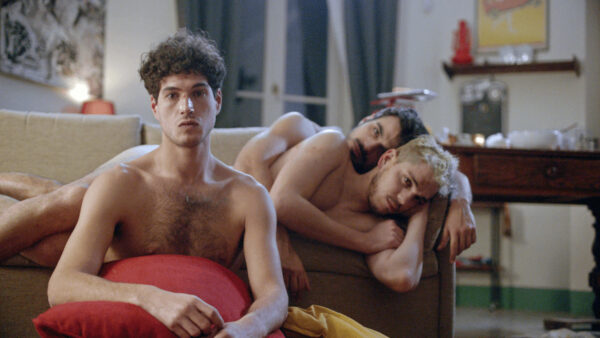 The mention of ‘rom-com’ makes my toes curl so the idea of a gay one was a thought I’d rather not have. How wrong I was. Directors Matteo Pilati and Alessandro Guida have created Mascarpone – a light, comic yet serious romp through one cute Italian man’s life journey to find himself.

Antonio, played by the exquisitely handsome Giancarlo Commare, is dumped by his husband after 12 years. He’s been a house husband, couch potato and erstwhile baker, but with no real job or income.

His life changes when he rents a room in the house of Denis (Eduardo Valdarnini), a camp, outrageous man who seems to derive his income from drug dealing and sex work, at which he’s obviously very good. Denis introduces Antonio to Luca (Gianmarco Saurino) – a dark, smouldering owner of a pastry shop, who needs a baking assistant in the run-up to a busy Christmas in Rome.

There follows a dizzying series of sexual encounters for Antonio, including with Denis and Luca separately, as well as both of them together. Not much romance in any of that – more frenzied seeking for gratuitous enjoyment in the moment. Seemingly afraid of another long-term commitment, Antonio nevertheless falls for the almost perfectly perfect photo-journalist Thomas (Lorenzo Adorni), but naturally the course of true love never did run smooth.

The sudden death of one of the central characters and an impending exam at pastry school, which Antonio is likely to fail, mean he has to choose between a new life in Milan with Thomas, a return to his husband or a career as the king of the pastry world.

We learn that the secret to the best tiramisu is to make your own mascarpone – good enough to eat by itself. It seems to be a sort of moral symbol Antonio can learn from – and not hide, as he tells us: “in anyone else’s shadow”.

Mascarpone is slick, funny, too good to be true, with a gallery of handsome men, but in the end a life-affirming romp with a serious undertone.

The good news is that distributors Peccadillo Pictures have put it in their end-of-year sale and so you can get it at a 30% discount until January 4. It’s available on DVD, on PeccadilloPOD, Amazon Prime, Apple TV and Google Play.