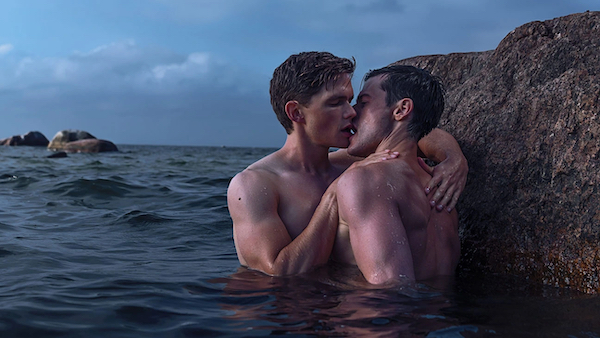 In 1977 Soviet-occupied Estonia, a secret and dangerous queer liaison starts between a private and a handsome, dashing pilot lieutenant.

In the brutal regime of a training camp and Air Force base on the front-line of the Soviet Union’s air defences, Sergey, a shy, good-looking airman with a love of photography, becomes the driver and assistant to an equally enthusiastic snapper of a new pilot, Roman (Ukrainian actor Oleg Zagorodnil), who has come to fill an important role at the base.

Their relationship, totally forbidden, ‘develops’ as well as their pictures. It’s a secret Sergey must keep even from his female colleague Luisa (Diana Pozharskaya), who rapidly gets involved in an outwardly friendly triangle with Roman.

What director Peeter Rebane pulls off is at once a realistic love story with thriller elements, set against the stupidity of authority. And the arc of the story includes a rightly suspicious major and a protective colonel who saves the two lovers’ bacon – probably inadvertently. A near-death experience for Roman adds passion to their affair, but things soon start to run far from smoothly. When Sergey leaves to become a drama student in Moscow, Roman must make up his mind about his future.

A hasty marriage between Roman and Luisa threatens the three’s relationships, with tragic results. It’s a great story on all levels and its title derives from the ballet which Roman introduces the innocent Sergey to.

Queer actor and co-writer Tom Prior is endearing as the slightly sullen, sometimes conflicted, sometimes infatuated, sometimes bitter, younger man. Oleg Zagorodnil is the smouldering matinee idol of a lieutenant and plays it well.

In the end it’s a tale of forbidden love, the power of art and the perils faced by earlier generations of queer lovers – and still today in Russia.

It’s available from The Factory on various platforms and PeccadilloPOD.