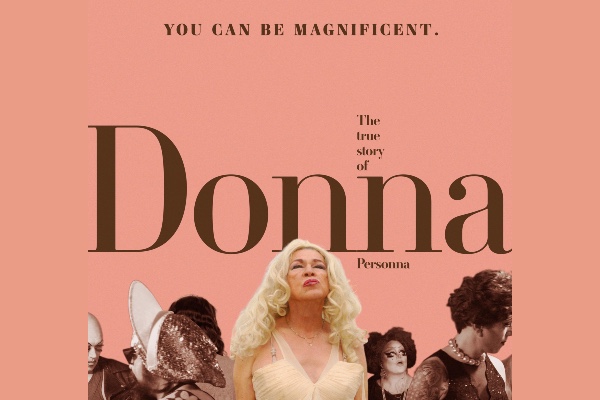 The lip-syncing star of San Francisco’s Queer scene, Donna Personna, has a truly remarkable life journey which Welsh filmmaker Jay Bedwani has brought to the big and small screen in a startlingly touching documentary.

Born into a staunch Baptist family in San Jose, Gustavo, as he then was, was literally the son of a preacher man. But it’s clear she always knew she was meant to be someone else.

Fast forward and the 70-something Donna becomes the co-writer of a play about a little known episode of Trans history – the riot by Trans women at Compton’s Cafeteria in San Francisco in 1966. The riot was a reaction to police hostility and as Donna tells us led to the formation of Transgender organisations and as she says: “ things got better”.

As a 17-year-0ld Gus got the Greyhound bus evey weekend to SF : “the world I knew was small, but every weekend I was coming to a fantasy land, where everything was thrilling, and so I found my way to the Tenderloin district and Compton’s”.

The film charts her collaboration with playwright Mark Nassar, the play’s creation, rehearsal and finally its performance. Donna is portrayed in the play by Trans activist/performer Shane Zaldivar – whom Donna acts a a sort of mentor to.

Reminiscing on her difficult upbringing, Donna also looks to reconnect with her younger sister Gloria, who has never seen Donna as Donna. There’s love but also angst and awkwardness – the rest of her family don’t know about this new persona. And there’s a worry that her dearly beloved brother Paul may react transphobically.

But we learn that it was Paul who persuaded the then-Gus to train as a hairdresser, and indeed Donna performs her coiffing magic on Shane and others in the film.

Ultimately it’s a story that depicts a journey to a new happier life and a truer sense of identity. ”In San Francisco I do anything I want. I look forward to when it (being Transgender) is not a thing at all. When you’re free to be, you can be magnificent”. Donna certainly is.