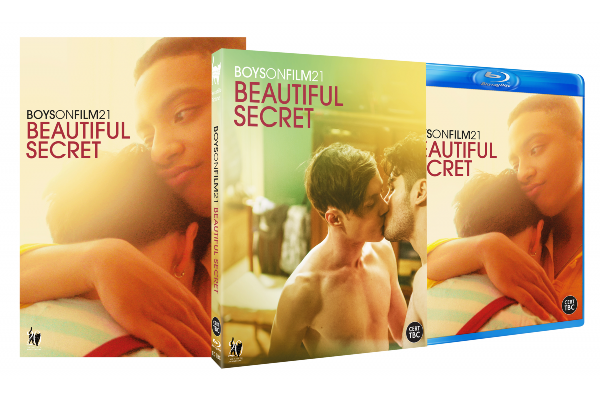 Peccadillo Pictures’  latest offering – Boys On Film 21 : Beautiful Secret- takes us to Margate, Gibraltar, Berlin under the Nazis and much more in a great and varied collection of short Queer films.

Memoirs Of a Geeza presents us with a hard street-wise boy who becomes a hard Queer man, trying out his sexuality and finding, to his surprise,  that his family is ‘like a wall of arms protecting me “.

We Are Dancers, for my money  the best of this bunch, is set in a seedy gay nightclub in Berlin in 1933 the night after the burning of the Reichstag , which gave the Nazis a perfect excuse for a clamp-down on amongst others the Queer community.

Hans Piesbergen is outstanding as the middle-aged drag artist Hansi, who surrounds himself with beautiful boys who urge him to leave Berlin while it’s still safe to do so. Hansi’s ex-boyfriend, now in the Gestapo, comes to warn him of his impending “ protective custody “ , but Hansi’s determination to be himself seems almost self-destructive when he confronts the Nazi raiders with an outrageous camp song about Frau Hitler . The end is inevitable,  but there could so easily be a full-length drama here. Hard t0 watch but a must.

L’ Homme Jetee is an elegiac piece about a young gay man who longs to go to sea with the trawler men he sees at the pier. When Giuseppe takes an interest in him, he introduces him to a macho ritualistic initiation which is violent and worrying. Will he catch the boat ? Will he catch Giuseppe?

My Sweet Prince shows us a troubled Isle of Wight boy ,Tommy  whose anxious mother worries about  his fiends but knows nothing about  his  internet hook-ups as Bitter End with the aptly named My Sweet Prince.  Engaging but needs more to it.

Dungarees, which I’ve previously reviewed as part of the Iris Prize short films festival makes another appearance here and it’s an endearing tale of a boy’s journey to girlhood. It’s also quirky and funny.

Clothes and Blow features voiceover performer Daniel and his appetite for fully clothed oral sex with strangers he finds online – hence the film’s title. When his mother and sister arrive in London from abroad , there’s a triangular  and comedic sequence about coming out, family disputes and eventual true love – well who knows ?

A Normal Boy starts with a predictable  pick-up in a bar . The inevitable sex scene is ruined by one of the two, who’s drunk, falling asleep  It’s further complicated when a female flatmate arrives. It’s a bit like the two guys’ sex – unsatisfying but interesting.

Finally Pretty Boy. Kevin is a sullen teenager skipping school and meeting a secret boyfriend Nico. When his mother finds it, she becomes violent, saying : You’re not one of them, what’ve I done wrong ? Not you two- not in my house “.But maybe out of the dreadful rejection there can be hope for the boys.

The films are on dvd, Blu-Ray or On Demand  or go to peccapics.com