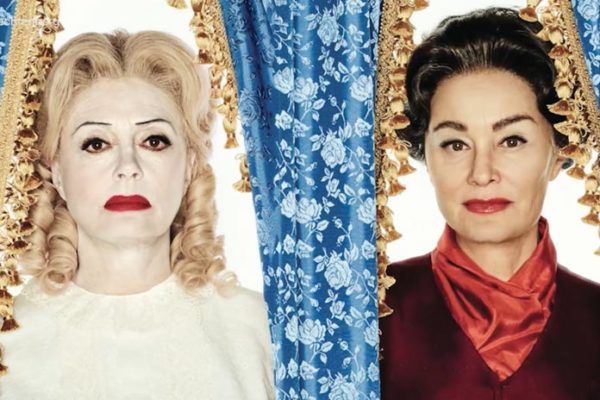 Ryan Murphy is firmly established as one of the best dramatists of our time. He’s the mastermind behind hugely popular shows such as Ratched, Boys in the Band, American Horror Story and Glee. Needless to say, his work has greatly increased LGBTQ+ visibility on mainstream television.

You can find most of his work on Netflix – invariably among the most popular shows on the streaming giant. But one notable, partially forgotten Ryan Murphy show is missing. Where is Feud?

It had a brief run on BBC iPlayer. You can pay to watch it in full on Amazon or iTunes. But in the age of streaming, that means Feud may as well be hiding under the Invisibility Cloak. It’s surely one of the most compelling and underrated dramas of recent years, not to mention a towering example of high camp.

It chronicles the legendary feud between Bette Davis (played by Susan Sarandon) and Joan Crawford (played by Jessica Lange). Their long rivalry was played up by the newspapers, not least by the actresses themselves.

When Joan Crawford passed away, Bette Davis received a call from a reporter. Davis gave her comment: “You should never say bad things about the dead, only good… Joan Crawford is dead. Good.”

But did they really hate each other? And what did their rivalry really amount to? These are the questions Ryan Murphy asks in Feud. Most of the drama centres around Whatever Happened To Baby Jane?, the legendary horror movie they made in 1962. The film traded mercilessly on their ageing bodies. Davis’ grotesque performance of I’ve Written A Letter To Daddy is instantly recognisable. It’s been recreated by many drag queens over the years and inspired many Halloween outfits.

Perhaps Bette Davis and Joan Crawford had so much in common they were purposefully pitted against each other. In a misogynistic, ageist industry, it’s easy to make fun of two fading actresses. Their Feud was more of a media narrative than anything else. They both respected each other as performers. Curiously, both would later have their reputations trounced by vengeful daughters. Christina Crawford’s account of her childhood, Mommie Dearest, caused permanent damage to her mother’s reputation and inspired one of the campest movies ever made.

Feud shows you the humanity of both actresses. Behind the headlines and bitchy put downs, they were two sensitive human beings who lived brilliant but difficult lives. It’s ultimately a sad story. Bette Davis and Joan Crawford’s feud ruined what should have been a lifelong friendship.

For gay men of a certain age, Bette Davis and Joan Crawford were the ultimate icons – along with Judy, of course! Ryan Murphy’s stunning drama attempts to rescue them both from the myth of Mommie Dearest and the thousand drag parodies.

Feud, I would argue, is the best show Ryan Murphy has ever made.

You can watch Feud on Amazon.