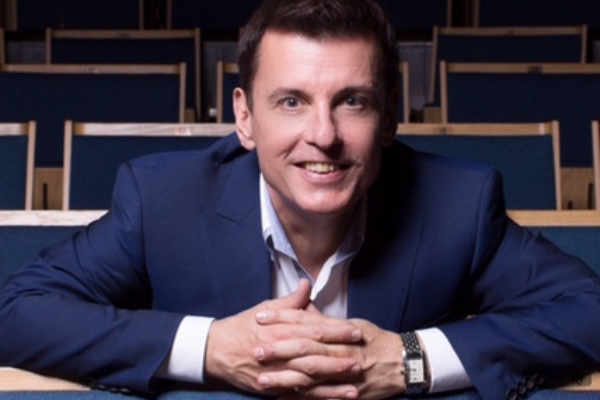 At nine Bill Deamer decided to follow his sister and take dance classes and when he acted onstage at school at Cheshunt he knew what profession was for him. But not straight  away. After a teaching degree, he opted  for  a two-year drama course and then he was off to Guildford School Of Acting. “I absolutely wasn’t thinking of a dancing career “‘ he tells me.

But the triple threat training – acting, singing, dancing made him understand how the three disciplines come together onstage. Directing started to enter his future plans  and meeting choreography legend Gillian Lynne cemented that view when he workedwith her on Cabaret , the musical ,  with Wayne Sleep as the MC. “ She told me I was a choreographer/director  and she because my mentor. You need people like that to help you on your way “. Even when he later choreographed the world stage premiere of Top Hat, which would win him an Olivier, he called Lynne for advice.

Top Hat was based on the Astaire film , and it followed a Fred tribute show where Bill met Fred’s daughter. He was offered the use of the film’s original choreography but he was clear he wanted to create his own. “ the stage show has 20 numbers compared with the film’s 5 . I spent 6 months kicking my ideas around in a studio first”.  The West End show was a triumph and won Bill an Olivier Award for Best Choreography .

A phone call from the National Theatre led to Bill choreographing Sondheim’s glorious Follies . “ All the women characters get to dance “  , and he had a boot camp to get their tap up to scratch.  And that was no mean feat as the subsequent staged number had them tapping on a moving revolve. “ We had the luxury of a long rehearsal period and a revolve in the rehearsal room”, he said.

And Bill’s had a 10-year  association with BBC TV’s Strictly Come Dancing, and its precursor So You Think You Can Dance?  His work on it is regularly seen as he has often choreographed the professional dancers’ opening numbers and he’s particularly associated with Musicals Week and also whenever  a Charleston is required. “ I have so much respect for the professionals in the show and how hard they work week in week out with their celebrity partners”.

Asked how it’s worked for Strictly in the last 18 months with no live audience for most of the shows, he said: “ It’s been very hard to see the dancers finish a routine and get nothing back — it’s been heartbreaking”.

But apart from his tv work Bill has been busy working on directing episodes of The Theatre Channel – reviewed regularly in Scene – which is a collaboration between Adam Blanshay Productions and the Theatre Cafe in London’s Theatreland. It showcases established and newer performers in and around the cafe but also more recently out on location. Bill admits that his tv work helped him with the venture. “ Gillian taught me to look at the script and the music and ask yourself: what do you want to say?”

Bill also says he’s been heavily influenced by the work of Astaire, Bob Fosse and Gene Kelly : “ we wouldn’t be where we are now without them. Never, ever can you ignore the style – you have to be the style”.He also pays tribute to the work of Matthew Bourne , creator amongst other shows of the  award-winning all-male Swan Lake -“ he brings new ideas and style – he’s a trail-blazer “.

Bill is one too, ofcourse though he doesn’t have to say so. In 2014  he was asked to re-choreograph the Gumbie Cat tap sequence in a revival of Andrew Lloyd Webber’s Cats – it eventually appeared first in the Korea production . “ Those moments keep you going – to work with  the best – Andrew is so supportive “.

And Bill is much in demand – he’s scheduled to direct and choreograph Irving Berlin’s Holiday Inn in Tokyo – a city he loves to work in. “ They have the utmost respect for the art form and they get what it’s about”.

But long before then his immediate sights are set on Hex – , where he’ll be choreography consultant on a new musical to be staged this Christmas at the National Theatre , based on the story of Beauty and the  Beast. Then it’s on to a tour of The Osmond Story, where he is to be the choreographer and in charge of musical staging – as he puts  it :  “all the bits in between the scenes.”

Asked to give advice to a 15-year-old Bill, he tells me : “ learn your technique ; without that you can’t go anywhere ; ask yourself of your work- can you take it somewhere else – have you the balls to do it ? “

Summing up he says of his profession: “ a choreographer starts with nothing and has to create what you see”.

Having lost work on 6 shows in one day when the pandemic shut the theatres, he understands entirely how hard it’s been for many performers and how lucky he has been to carry on working in some way.

And as a daily cyclist of 15 km , there’s no doubt Bill is  determined to stay  Strictly on his top form.

More about Bill at billdeamer.com