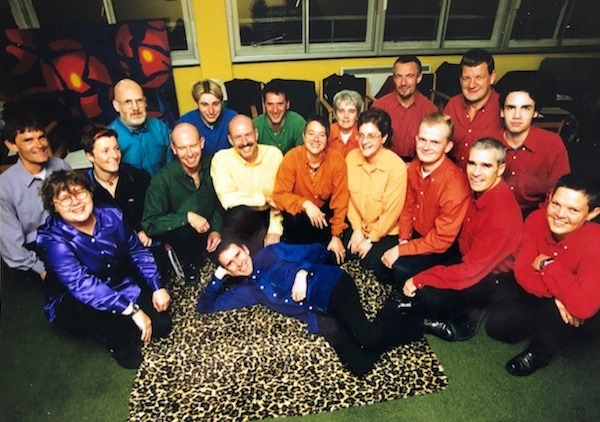 Beginning A Rainbow: The Origins of the Rainbow Chorus, Brighton & Hove’s LGBTQ+ Choir
by Carl Boardman

When the current Chair Katy asked me to put down a few words on how the Rainbow Chorus started I though “Oh, great. I love an origin story”. We often want to know how things began, what was the moment? I’d like to say there was a lightbulb, a ‘Eureka’, a revelation or possibly a sign in my waters, but that would be stretching things a little. The answer is a little bit more prosaic: it was a process.

I moved to Brighton in 1997 and, as a former Pink Singers member in the late ‘80s/early ‘90s, I longed to sing in a similar choir. The ‘Pinkies’ were such fun and I made some great friends there. So, I scoured Gscene, chatted to the local Switchboard and asked around in the pubs and clubs. All I discovered were rumours that something might have existed years before, but all my enquiries eventually came to nothing.

I love all kinds of music and the human voice is an amazing instrument that can convey very complex ideas. There’s something special, powerful and enriching about combining various voices to build something that is greater than the sum of its parts. I was volunteering for Switchboard during that summer, and they had space at Community Base on Queen’s Road. It was becoming clear to me that to have the experience that I longed for in my new hometown I might have to create it myself. This seemed quite a leap because, although I am a naturally musical person, I have no formal education and am essentially self-taught. So, goaded on by the confidence of youth, I figured that it shouldn’t be too difficult. All that was needed was: 1 – a place to meet; 2-people; 3 – music.

The first was easy and Switchboard kindly offered a free space on Monday evenings – Tick! People had to be found so I printed a batch of simple posters for distribution around the scene’s various venues – very analogue! I also spoke to Gscene’s James Ledward about putting a short piece in the magazine and he was very supportive. I didn’t have an email address so I can only think that this was done over the phone or possibly with the help of a digitally connected friend – Tick! What halcyon days I was living in the late 20th century before social media, smartphones and apps!

That left the challenge of ‘Music’. Who would lead this potential choir, find the music, teach the songs? I didn’t know any musical directors, choir leaders or conductors in Brighton, saying nothing of musicians, pianists or accompanists. This was getting all a bit complicated and intimidating. All those things would need to be addressed later and I decided that the priority was to make a start with the limited resources available. Keep it simple! Begin…

An obvious potential resource was, well… me! I already knew a few pieces ‘by ear’ and I could probably bluff my way through teaching them. Plus, I’d taught myself how to read music as a teenager so I could find other suitable pieces. Of course, I’d probably be forgiven if it was all a bit wobbly and really, in the grand scheme of things, I wasn’t exactly creating The Proms. Anyway, I was sure that a suitable choir leader would emerge soon then gracefully relieve me of the role. They would have skills, experience and be brimming with a kindly nature to develop a community choir with confidence, direction and flair.

This was about people and community – that was the heart of this process. With that idea at the core of things, what could possibly go wrong? Apart from me being alone in an empty room on a Monday evening! So, I’d soon be able to hand things over to an experienced person and get singing again – Tick(ish)!

The first night drew closer and so did my nerves. I did my preparation and planned what we should do. I was delighted that six or seven people came. In the film version of this story there would be at least 25 and, who knows, maybe there were, but that’s not what I remember, even after a quarter century! Everyone seemed a bit nervous, so I just faked confidence and we played some warm-up games to loosen up, sang a couple of rounds then I taught a song or two. Everyone looked to me for encouragement and support, as if I knew what I was doing. There definitely were moments when our voices intertwined and blended to create a rough magic, something intangible and momentary that hung in the air, and then afterwards was gone. It all seemed to go rather well, and I came out feeling slightly euphoric which spurred me on to continue the following week.

People continued coming to that place and made music purely from their voices. There was no piano to prompt, no papers to rattle (to begin with); just listening and connection. That journey, that process had begun…

Five years later a committee had been formed to take over the management and finally a new musical director took over and I had a short break from the choir… which lasted over 16 years! In 2019 I re-joined to sing and finally achieve my aim. Like Doctor Who, several regenerations have taken place over the last 25 years and batons have been passed on. The Rainbow Chorus is well established and at the heart of the LGBTQ+ communities of Brighton & Hove. Countless people have made enormous contributions to the success of the choir. Thanks to their hard work the Rainbow Chorus continues to evolve, grow and be relevant. Now we have Silver, I look forward to Gold!

The Rainbow Chorus is 25 years old this year and has a celebratory summer concert on Sunday, July 9, 2022. Tickets available HERE or HERE