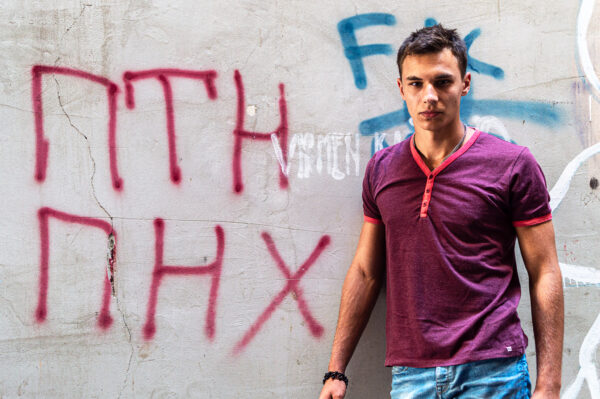 Elska Magazine, a publication dedicated to sharing the bodies and voices of diverse men from all over the world, has put the spotlight on Ukraine for its latest issue, Elska Lviv.

Inside readers can get up close and personal with a cross section of beautiful people from a beautiful country.

This new edition invites readers to meet over a dozen ordinary Ukrainian men, presented through a combination of intimate photography and honest storytelling. Some of these subjects were met and photographed in the beautiful Western Ukrainian city of Lviv following the initial invasion of Ukraine by Russia.

Then an additional cohort came to the Elska project after the more recent escalation, some being still in Ukraine and some who managed to flee.

“Since our launch in 2015 we’ve produced 40 issues, and our very first was made in Ukraine,” says Elska editor and chief photographer Liam Campbell. “Since the massive heightening of hostilities by Russia after 24th February 2022 there was a lot of demand to reprint that first issue, but I was unsure if a publication that is in many ways about showing off beautiful male bodies was too light for such a dark moment.

“So I decided to ask some of the men who took part in our first Ukrainian edition how they felt and they passed on their blessing, emphasising that anything that can bring attention to their country is welcome, and that we should be sure to share contemporary voices that can shed light on life during this difficult moment.”

The photography in Elska Lviv is the result of a rather spontaneous and casual process, without preparation or posing, where the photographer and subject merely spend time together, walking, talking and relaxing, clicking the camera periodically.

This relaxed style enables one to feel like they are really getting to know these people, which is then enhanced by the addition of stories, many of which were written by the participants themselves (where applicable published in the original Ukrainian and followed by English translations).

Some of the men and stories you’ll meet in this issue include:

• Serhii M, who recounts the moment he met his best friend’s cousin, leading to a lightning strike of attraction that became his big gay awakening;

• Maksym K, who shares a poem to express his anger, anguish and most fierce resolve in the face of Putin’s war;

• Taras D, who talks about his emotional response to sharing a bus with a soldier and his mysterious duffel bag;

• Vyacheslav K, who tells us why he decided to leave his village in Mykolayiv Oblast for a new life in Lviv, and why he’s not sure he can find happiness anywhere in Ukraine;

• Mykola K, who recounts the moments leading up to the explosion of war last February, and then reveals through his photographs what happened after those first missiles rained down.

Elska Lviv is 196 pages and is available from a select group of shops around the world as well as for order online from the Elska website. Also available is a companion zine called Elska Ekstra Lviv, containing nine more men plus hundreds of pages of outtakes and behind the scenes stories.