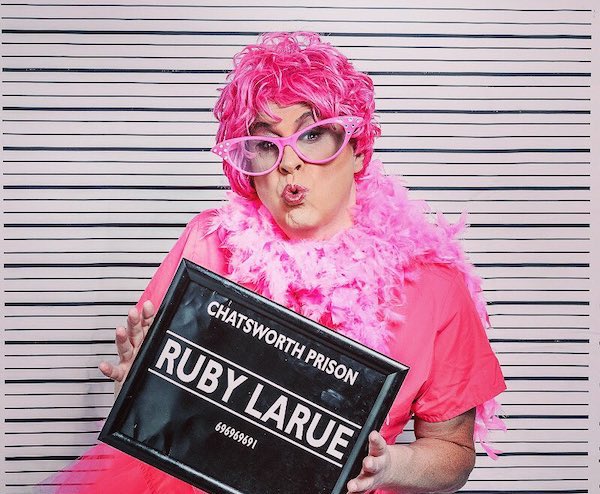 The character of Ruby LaRue, who first appeared in the short comedic film Digging Up Dorothy, will soon be seen in the halls of Chatsworth Prison on the Canadian comedy series, Pink Is In, created by trans film and TV producer Lisa Crawford. The show was recently nominated for the 2022 ACTRA Series Ensemble Award.

Pink Is In follows the comedic antics of the staff and prisoners at a fictional women’s prison set in Hamilton, Ontario. Season two of the series will begin airing on Bell Fibe TV1 on April 11, 2022.

“I created Ruby for a short film that I wrote and produced in 2019,” says Ruby’s portrayer Darren Stewart-Jones. “I met the main writer of Pink Is In through my work as a co-producer on the series and he liked the Ruby character so much, he asked if he could write her into the show!”

Ruby shows up at Chatsworth as a new prisoner in episode two of season two and she soon begins to cause a bit of a stir. Her storylines include officiating a wedding and helping to sneak a male stripper (played by Nathaniel Bacon) into the prison.

Ruby also has a very small cameo role on an upcoming episode of the new Kids In The Hall series. “She gets around,” says Stewart-Jones. “Ruby is like a bad rash that spreads like wildfire and won’t go away!”

Pink Is In season two begins streaming on Bell Fibe TV1 in Canada on April 11. The show’s producers are currently seeking a UK network or platform that may be interested in airing the series.