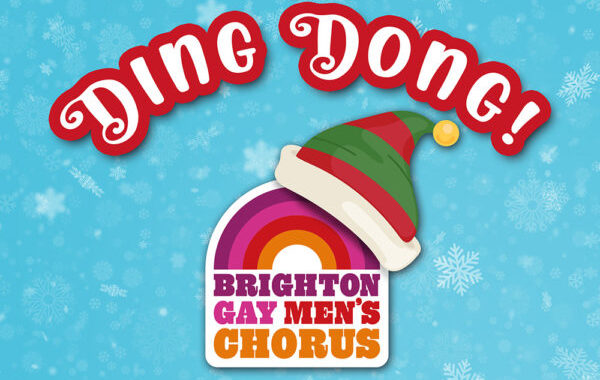 From festival to festive! Following on from an open-air performance in Barcelona, Brighton Gay Men’s Chorus (BrightonGMC) are back in their home city and ready to make the yuletide gay! In fact, they’re so keen to jingle their bells, this year’s show is entitled Ding Dong!.

With its roots set firmly in the Hollywood Christmas Rom-Com tradition, Ding Dong! might just be the first gay Christmas-romantic-comedy-musical-show set in Brighton the world has ever seen!

Mirth and merriment are guaranteed as the chorus pulls out all the stops to perform a mix of Christmas classics and pop party-starters.

Alongside glamour, glitz and gorgeous harmonies, this year’s shows – on Friday, December 2 and Saturday, December 3 – will also play host to a very special guest. BrightonGMC Chairperson Vaughan Leyshon explains: “It’s been a busy 12 months and we can all use an extra pair of hands right now. That’s why for our Christmas shows we’ve invited one of ‘Santa’s little helpers’ to stop by and give us some assistance. Mind you, Brighton’s a bit of a culture shock when you’re from the North Pole so we’ll have to see how he gets on!”

A show big on laughs but with a lot of heart is the perfect match for BrightonGMC’s trademark camp, but cultured style says Music Director Dr Joe Paxton: “As a community choir we know it’s important to have fun onstage, but we also work hard to bring out the emotion in whatever we sing. This show really gives us the chance to take the audience on that journey with us – all the way from Santa’s Workshop to Brighton!”

BrightonGMC was founded in 2005 and has approximately 100 members. They perform regular sell out shows in the Brighton area, including as part of Brighton Fringe Festival and Brighton & Hove Pride. As well as their Christmas shows, they will also be performing in the city’s annual World AIDS Day concert on Thursday, December 1. Their founding principles are the 3 S’s – Singing, Socialising and Support.