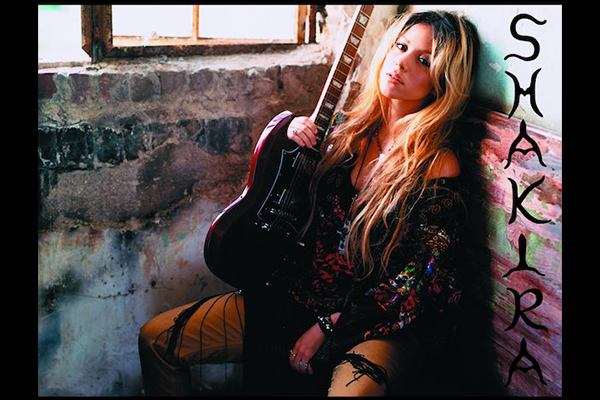 Colombian singer and songwriter Shakira is celebrating the 20th anniversary of her first English album Laundry Service… released in 2001 and one of my personal favourite albums ever! I was 14 and I bought the CD for my dad for Christmas, but I borrowed it from him all the time because I wanted it really. I think everyone buys someone a present that they want themselves sometimes, don’t they?!

When Whenever, Wherever came out I was like woah she’s like the Colombian Britney – a pop culture moment! I still love the lyrics as much as I did then, now, including “Lucky that my lips not only mumble they spill kisses like a fountain,” and the iconic “Lucky that my breasts are small and humble so you don’t confuse them with mountains”. YASSSSS!

Twenty years later I’ve finally found out why the album has the… intriguing title that it has, Shakira said “The title was inspired by that fresh clean feeling you have when you newly fall in love again – you have a clean slate, and everything is fresh and new.” It’s testimony to her talent that the album still sounds as fresh and exciting and DELICIOUS as it did in 2001. By the way if you’ve never listened to this album before, I’m so jealous because I’d love to listen to it again for the first time ever.

Standout tracks for me were and are Objection (Tango), Underneath Your Clothes, obviously Whenever, Wherever, Rules, The One, Ready For The Good Times, Poem To A Horse and Eyes Like Yours (Ojos Asi) – basically the whole album!

Laundry Service: Washed and Dried will be released on December 17 on a 12-inch vinyl, a MUST for any Shakira fan. I’ve already preordered and of course there’s an expanded digital edition to stream, which includes four bonus tracks including the Super Bowl LIV version of Whenever, Wherever!