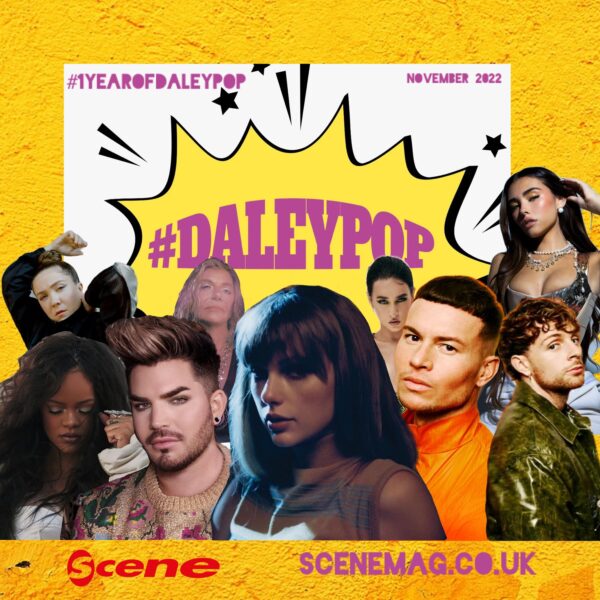 Music has been embedded in my life ever since I was in the womb, my Mum and Dad basically raised me on music, especially POP music! I grew up listening to Madonna, Mariah Carey, Kylie Minogue, Spice Girls, Britney Spears…even AQUA! I love sharing my favourite songs and album every month with you all from Scene HQ and can’t believe that I’ve been writing this column for one year now… #1YearOfDaleyPOP :). Follow me on Twitter @DaleMelita and Instagram @itsdalemelitabitch and here’s your #DaleyPOP playlist for this month.

Multi BRIT-nominated DJ, producer, and hunk Joel Corry (who follows me on Twitter so you should too) has released ANOTHER masterpiece which gives me Eurovision vibes (in the best way), with singer-songwriter Tom Grennan this time.

Joel said: “I’m buzzing to collaborate with my boy Tom Grennan on Lionheart (Fearless),” and that “Tom is an amazing artist on top of his game. This record is a new direction for me and an evolution of my sound. I wanted a create an anthem for the festival main stages and I can’t wait to perform it with Tom around the world.” I can definitely imagine this track going off at Ibiza Rocks… and at Club Revenge!

I love a bit of Euro-pop on a Saturday night or even in this case on a Sunday night! Romanian singer – songwriter Holy Molly never disappoints and now she’s teamed up with German DJ and producer duo LIZOT for this actual bop – such a good track to have on during pre-drinks.

Rihanna – Lift Me Up

Navy! We won. RiRi has made a very welcome return to music with Lift Me Up, her first solo single since 2016, taken from the Marvel film Black Panther: Wakanda Forever.

I’ve missed her voice so much and on the first listen I was glassy eyed and now I feel like I’ve been baptised!

Rihanna’s voice is ultra soothing and maturing like fine wine and now I’m even more excited for the Super Bowl LVII Halftime Show in February 2023!

Madison Beer – Showed Me (How I Fell In Love With You)

LA-based Madison Beer (I know, such a cool name) has unveiled this new track following its premiere debut play on BBC Radio 1. Mads said: “This song samples The Turtles‘ You Showed Me.

“I’ve never used sampling or interpolation on a song before, but I’m always looking for new ways to experiment in the studio and pay homage to the classic sounds and melodies I loved growing up. This song is the perfect culmination of those things.”

Sampling done right in my little opinion, this song is a gem.

Adam Lambert – Mad About the Boy

Superstar Adam Lambert has gorgeously covered Sir Noël Coward’s Mad About The Boy for an upcoming documentary about, yep, you guessed it, prolific songwriter, actor and playwright Noël Coward (although it could definitely be used in a gay James Bond film too, just saying)!

Adam said: “He (Nöel) wrote it about a man and he was never really able to record it because that would have been too taboo for that time,” and “So it’s always been a torch song sung by amazing female vocalists. And when they realised, ‘It’s 2022, we’re going to put this film out,’ they came up with the idea of having a guy sing it as it was really intended.”

Kesha’s mum Pebe Sebert has released her second ever single and I reckon if it was released in the ’80s (like it was supposed to) it would’ve gone straight to number 1!

Pebe said: “My portion of earnings will go towards the Magic Mission (a non-profit dedicated to improving the lives and stopping the overpopulation of dogs and cats in Central America) It’s one of the last songs I ever recorded in the ’80s, completely heartbroken in the studio through tears. It’s the song all the labels wanted. I lost my love, my record deals and my mind. But here it is, decades later, revamped by producer Guy Roche.”

I’m getting Belinda Carlisle vibes and loving it tbh… stream for a good cause!

Norwegian singer-songwriter and Spellemannprisen (basically a Norwegian Grammy Awards winner) Emilie Nicolas is a big deal in Norway and is back with new music and a new vibe.

I discovered Emilie through Björk’s new album, (she‘s featured on Fossora track Allow) and Easy is just SO GOOD and perfect for listening through headphones walking to work in the rain in a fresh out of fucks forever mood!

Fellow Swifties – I’m so happy and excited that Taylor’s back to her best with her traditional brand of pop and the album has so deservingly been met with critical acclaim and broken so many records! Midnights is the fast-selling album of 2022 in the UK, with 204,000 sales, more than doubling her previous biggest opening week in the UK (with 1989 in 2014).

Also, Anti-Hero (one of my fave songs from the album – the video is so good too) is the Biggest Spotify UK debut from an international artist in history. Taylor is the first female artist to debut at Number 1 on both the UK Singles and Albums Charts simultaneously since Miley Cyrus in 2013. Also, Midnights accumulates the biggest first week vinyl sales since modern chart records began (in 1994).

Midnights was certified gold in the UK after just two days of its release. With nine consecutive Number 1 albums now under her belt, Taylor has set a new all-time Official Chart record, generating the fastest succession of nine UK Number 1 albums of any female artist.

My fave tracks on the album are… all of them of course, but Anti-Hero and Snow On The Beach featuring Lana Del Rey hold a special place in my heart :).