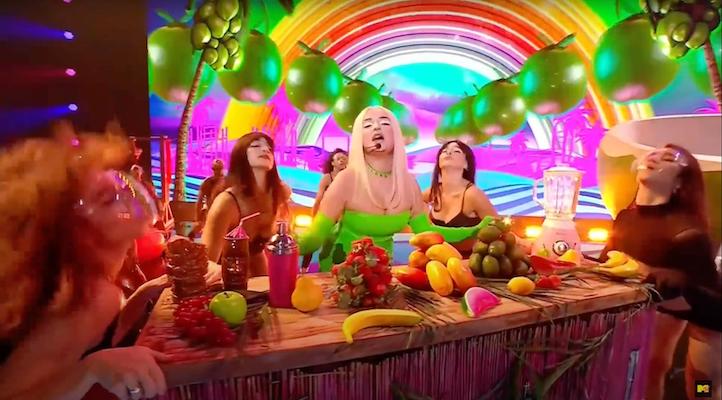 Last night, the MTV Europe Music Awards (EMA) returned to a real life show from the Papp László Budapest Sportaréna and was broadcast live on MTV channels in 180 countries. MTV stuck to their guns over the location of the awards to show solidarity to the LGBTQ+ community, despite Budapest’s recent passage of legislation widely condemned as anti-LGBTQ+.

British star Yungblud declared his Best Alternative Award as a “tribute to individualism” and said when he was younger he was “terrified” and: “If you are out there and you feel you cannot be who you are – you can be. Keep fighting, keep being brilliant.” Naww, thanks Dom.

Years And Years aka Olly Alexander, presenting Best Video, said of the nominees: “They all support same sex adoption as family is family” in reference to Hungary’s ban on same-sex couples adopting children, introduced by its parliament last year.

Lil Nas X won Best Video for Montero (Call Me By Your Name) but couldn’t be there in person so accepted the award via a pre-recorded video and said he was having to “work his shift at Taco Bell” – LOL.

German singer-songwriter Kim Petras is the moment. She made EMA’s history as the first out transgender woman to perform at the awards show and performed a medley of two never heard before BOPS called Coconuts and Hit It From The Back and her mic was ON! Kim said “I watched the EMAs since I was a kid. I grew up in Germany and it was a big deal for me when they happened. And being the first transgender performer on there is very surreal to me and very amazing because I remember never seeing a transgender pop star at the EMA’s when I was a kid and so it’s a dream come true, it’s a full-circle moment.”

OneRepublic‘s Ryan Tedder said “I’m from an extremely conservative, right-wing city and family and religious community so until I was 20 I had the same kind of thoughts of like ‘Oh, that’s bad, this is good’.

“And now I’m sitting here going it’s absurd we even have to make these statements that everyone is equal and showing love and equality. “These are things that should have been the absolute bedrock of constitutions and humanity for the last 100 years but, you know, it takes a minute for humans to catch up and I think we’ve finally caught up.”

The MTV EMA’s launched the Generation Change Award in 2018 to recognise “fearless, original young people who are tackling the world’s toughest problems through music, storytelling or digital media,” and so the MTV EMA Generation Change Awards went to five honourees this year for fighting against anti-LGBTQ+ policies, as changemakers who further equality and love in their chosen work. The award is part of an expanded partnership between MTV and LGBTQ+ advocacy group All Out.