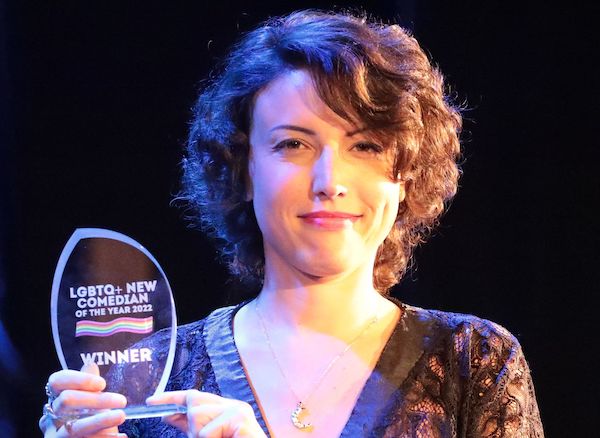 Comedy Bloomers, which saw fresh comedy talents on the circuit battling it out for the chance to win the title of LGBTQ+ Comedian of the Year, came to a close at the the Clapham Grand on Tuesday, June 14.

There could only be one winner and it was Victoria Olsina who took home the overall prize that included a trophy and their own solo show which will be professionally streamed on the comedy platform Next Up Comedy.

On winning this award, Victoria said “It’s an honour to have won, it’s an award that is important for comedy but also important for the visibility of the queer community. I can proudly say I’m the funniest gay in the UK. I’m so happy to have performed along with such talented comedians, in such an iconic venue, Clapham Grand, and for the opportunity to get feedback from comedy legends.

“It has been an unforgettable night and a dream come true! Thank you to Chris Smith and his team at Comedy Bloomers for making it happen. As an immigrant, I came to this country to steal your jobs, your women, and your comedy and so far I’m doing this.”

Runners up were chosen by the audience. Despite the tough competition from all entrants, they chose Dick Denham and Lachlan Werner who were closely followed by all the acts involved.